ANC in KZN to march against judiciary on May 15 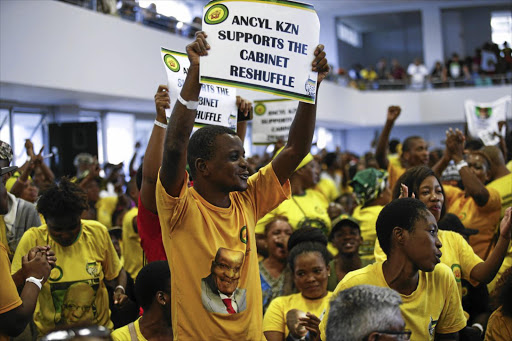 The ANC in KwaZulu-Natal has declared war on the judiciary and is planning a mass march against it next Monday.

KwaZulu-Natal ANC secretary Super Zuma said on Wednesday that faced with increasing “encroachment on political and executive matters” by the judiciary‚ the ANC in KwaZulu-Natal will hold a day of mass action aimed at defending their vote on Monday‚ May 15.

The branch however warded off suggestions that it was a pro-President Jacob Zuma march in retaliation for the rampant anti-Zuma marches that have taken the country by storm. They said it was a decision taken following a provincial executive committee (PEC) meeting.

It comes as the parliamentary call for a motion of no confidence in Zuma is temporarily halted pending a Constitutional Court hearing on Monday and judgment on a secret ballot for the vote.

He said the judgment of the court – expected to be delivered on that day – in favour of a frivolous vote of no confidence against Zuma would be a judiciary overreach. Last week‚ North Gauteng High Court Judge Bashier Vally also ruled that President Zuma should furnish the DA with reasons behind his reshuffling of the cabinet last month.

“ANC MPs in parliament represent members of our movement and the supporters who voted the ANC into power. Therefore the use of judiciary by the opposition parties undermines the principle of separation of powers‚” said Zuma.

“It’s not a pro-who or anti-who march‚ but the leader of society which is the ANC is the one that is embarking on this march‚” said Zuma.

KwaZulu-Natal ANC spokesman Mdumiseni Ntuli‚ who addressed the media briefing with Zuma‚ questioned why the judiciary had this “appetite to encroach on political matters”.

“Only in South Africa when you can have a judge ruling on the matters of the executive. It is strange and dangerous. The executive is the one that implement and monitors‚ not the judiciary. There’s a clear separation of powers from these organs of the state‚” he said.

He said the judiciary was therefore overstretching its legal mandate.

Zuma and Ntuli blamed the opposition parties saying they lost elections in 2014 and that is why they were now resorting to using the courts. “Hence our day of mass action‚ it’s a clear attempt by those who contested and lost elections to want to rule using our courts‚” said Ntuli. Zuma said the ANC spent 80 years fighting for the disenfranchised and they don’t want that vote to be undermined.