SAHRC concerned about intimidation of media 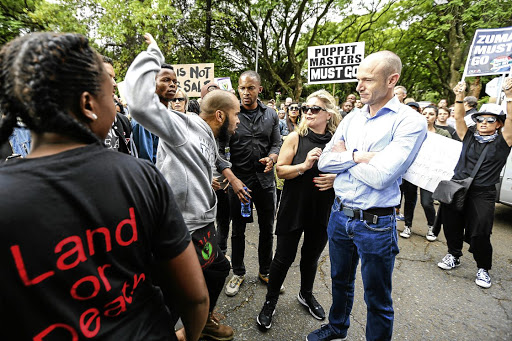 STAND-OFF: Black First Land First members clash with #saveasouthafrica members outside the Gupta compound in Saxonwold, Johannesburg. BLF members argued that white people should not attack the family 'because white people own most of the companies on the JSE'. The group held up signs saying '#HandsOffZuma'.
Image: MOELETSI MABE

The South African Human Rights Commission (SAHRC) has expressed grave concern about the targeting and intimidation of journalists by the Black First Land First (BLF) group and the threats by the organisation to protest at the homes and places or worship of members of the media.

It noted that Section 16 (1) (a) of the Constitution of South Africa‚ guaranteed “the right to freedom of expression‚ which includes — freedom of the press and other media”.

The South African National Editors’ Forum (SANEF) is to apply for an urgent interdict to stop Black First Land First (BLF) from harassing and ...
News
5 years ago

Only the truth will set credibility-wreck Gigaba free

“A free press is a cornerstone of our constitutional democracy. Any attempt to threaten or intimidate the media is an attack on our democracy and is a violation of our Constitution‚” the SAHRC said in a statement.

“Further‚ section 15 of the Constitution guarantees freedom of religion‚ belief and opinion. As such‚ threats by BFLF to protest at places of worship of members of the media‚ is an infringement of this right‚” it added.

The South African National Editors’ Forum (SANEF) said on Sunday it planned is to apply for an urgent interdict to stop BLF from harassing and intimidating journalists.

SANEF had given the group‚ which allegedly has links to the Guptas‚ until 12 noon on Saturday to give assurances that it would stop harassing‚ threatening and assaulting journalists‚ however‚ the movement declined.

This followed a protest by about 20 BLF members outside the Parkview home of Tiso Blackstar editor-at-large Peter Bruce on Thursday during which he was threatened over an article he wrote about the Guptas. BLF members also assaulted Business Day editor Tim Cohen outside the house.

The Black First Land First movement picketed outside the home of Tiso Blackstar editor-at-large Peter Bruce on Thursday. The protesters demanded that he start writing about the “wrongdoing” of white monopoly capital and said they would occupy his home because it was built on stolen land. Subscribe to TimesLIVE here: https://www.youtube.com/user/TimesLive

This was followed by a statement by the organisation on Friday threatening a number of white journalists – among them Peter Bruce‚ amaBhungane's Sam Sole‚ News24 editor Adriaan Basson‚ 702 presenter Stephen Grootes‚ News24 columnist Max du Preez‚ Eyewitness News' Barry Bateman and Biznews editor Alec Hogg – accusing them of racism‚ publishing fake news and covering up “white corruption under the guise of journalism” .