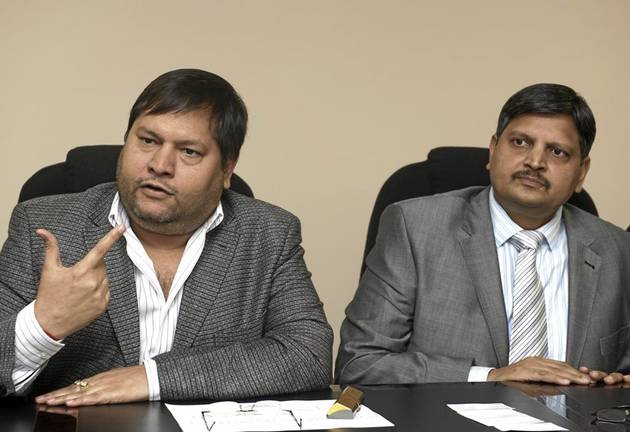 The Gupta family has been caught up in a new controversy.
Image: MARTIN RHODES

The Twitterati has come to the defence of South Africa’s democracy outing fake pro-Gupta accounts.

The software-run accounts — known as Twitter bots — have been used to promote the White Monopoly Capital narrative.

Many have been shown to have been created in India.

Of snakes, politicians and ladders...and why the ANC is yet to grasp democracy

Don Mattera, the veteran struggle poet/writer and raconteur par excellence, has a beautiful analogy — often told with the panache of which only he is ...
Opinion & Analysis
5 years ago

Bell Pottinger harmed us. Now it can help us

About a year ago news began to leak that all was not well inside the offices of Bell Pottinger, the London public relations firm that advised the ...
Opinion & Analysis
5 years ago

A British citizen who grew up in South Africa wants his petition to have a UK parliamentary inquiry into Bell Pottinger's “white monopoly capital” ...
Politics
5 years ago

The accounts have been singing the praises of pro-Gupta supporters‚ such as Mzwanele Manyi and Andile Mngxitama‚ and harassing journalists reporting on the embattled family.

The strategy of the Twitter bots is to praise those apparently on the Gupta payroll.

Numerous Twitter accounts‚ such as “Esaia Theron”‚ have been shown to be fake.

“Theron“‚ whose profile describes him as a “fishthinker”‚ tweeted on Sunday: “We all have to admit that @Mngxitama is the greatest of all so much passion he has for the improvement of the country. #BLF” [sic]

“Theron” is referring to Andile Mngxitama ‚ the leader of Black First Land First (BLF). Mngxitama‚ who’s allegedly on the Gupta payroll‚ was interdicted by the Johannesburg High court on Friday from harassing journalists.

The bots have been harassing journalists listed by the BLF.

Eye Witness News reporter Barry Bateman is just one of the reporters targeted by the bots‚ picking up 500 new fake followers daily.

Bateman was forced to lock his account to protect it.

After doing so the “Theron” bot mocked Bateman‚ saying “Author of ’Behind The Door’ now goes behind the door”.

Bateman wrote the book‚ Behind the door‚ on the murder of Reeva Steenkamp.

“Theron” also threatened Bateman after he blocked his account.

“#BarryBateman stay protected ... if you ever thought of unprotecting your account‚ better be prepared for us!”

Johannesburg marketing strategist Andrew Fraser‚ who has analysed many bots‚ says they are often easy to identify by their strange names‚ identical profiles and the fact that they all tweet the same thing at the exact same time.

Using online tools‚ he has found that many were generated in India.

The Twitter users are easily identifiable by their fake names such as Bongi Vorster‚ and a blonde lady named Iminathi Junior.

Currently‚ the most popular names for the fake accounts are inspired by the South African cricket team.

Through his analysis Fraser found that bots follow accounts with hundreds of thousands of followers so as to appear legitimate.

Analysis of Manyi's followers by South Africans found that 60% of his followers were fake.

Fraser and Le Roux’s analysis has upset people because on Sunday the anonymously-run website‚ White Monopoly Capital Leaks‚ published a story on their analysis saying they were being paid for it by white media.