‘They'll charge me because I refuse to die in silence’: Khoza 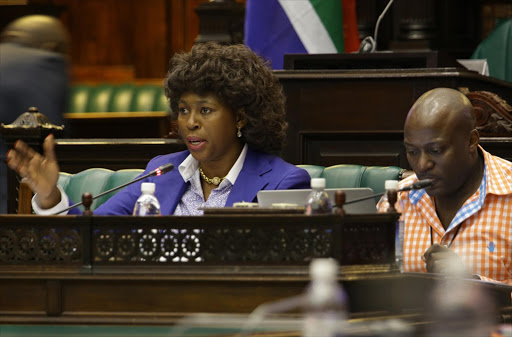 A day before defiant ANC MP Makhosi Khoza was charged with two counts of ill-discipline on Wednesday‚ she took to Facebook to say that the party's KwaZulu-Natal structure would charge her because "she refuses to die in silence".

In a lengthy Facebook post on Tuesday afternoon‚ Khoza wrote: "Tomorrow (Wednesday) I understand I'll be charged by the ANC KZN that has to appear in court because it is accused of having rigged elections. They'll charge me because I refuse to die in silence.

"The unknown legal status ANC KZN is not just charging Makhosi Khoza‚ it is intimidating the ANC MPs who are like me sick and tired of defending wrongdoing. This is about ensuring specific outcomes on the 8 August 2017. My call for a secret ballot was correct because I knew ANC MPs would be intimidated. Whether the Speaker (Baleka Mbete) decides in favour of a secret ballot or transparent‚ voting no longer matter. My charge is directing her to decide in particular way to ensure a specific outcome‚" she added.

The source said the outspoken Khoza has been accused of behaving in a manner which provokes divisions or impacts negatively on the unity of the ANC‚ failing to comply with party policy and violating 11 party rules including bringing the party into disrepute.

On July 2‚ Mbete announced that the date for the debate on a motion of no confidence in Zuma has been changed to August 8.

The debate was to have taken place on August 3‚ while the deadline for political parties to submit their views regarding whether voting should be by secret or open ballot was July 14.

This followed further consultations with political parties in Parliament and with the executive‚ she said at the time.

The ANC in KwaZulu-Natal confirmed that Khoza has been officially charged‚ although it refused to divulge the nature of the charges.

"We can confirm that she has been served with the charge sheet. She received the charge sheet late [Tuesday] evening or late afternoon. She will appear before a disciplinary committee. This is an independent process so I don’t want to disclose more information‚” said the party's secretary‚ Super Zuma.

He said Khoza could speak openly about the charges she is facing.

“We really need to preserve her rights and we don’t want to expose our case. We don’t want a situation where she comes to the disciplinary [hearing] and claims she has been dealt with publicly‚” he added.

In her post‚ Khoza went on to say: "I believe in the government of the people where ANC leaders collectively decide who is deployed or removed. In this case kleptocracy is evident. Corruption is enemy number one of Africa's development and prosperity for all. I'll fight it with all my strength‚" she added.

She further went on to say that her refusal to support all that which is inconsistent with the ANC mission has "landed me in insults‚ threats on my life‚ condemnation".