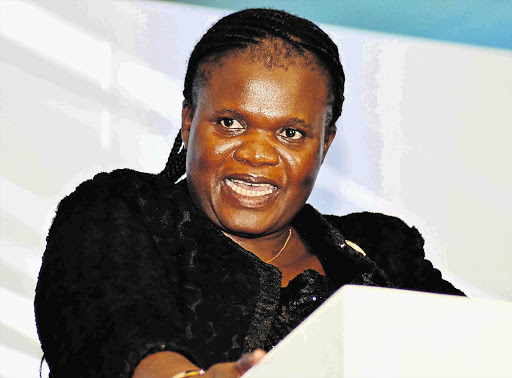 Public Service and Administration Minister Faith Muthambi must be summoned to parliament to account for reports that she wasted R300,000 in taxpayers' money, the DA said yesterday.

The Sunday Times reported that she flew in 30 friends and family members for her budget speech in parliament in May.

The DA's Desiree van der Walt said yesterday she would write to the chairman of the portfolio committee on public service and administration, Dr Makhosi Khoza.

"Muthambi must be made to repay every cent she spent on making sure people would come to watch her speak," Van der Walt said.

She said she would approach Khoza to request that Muthambi be called to explain her actions.

"These reports have surfaced on the back of revelations that the Gupta family had received highly confidential cabinet meeting information from Muthambi in May.

"The DA will not stand for this. Muthambi must appear to account before the public service and administration committee and be made to pay back every cent of wasted taxpayers' money," Van der Walt said.

Muthambi sidelines DG who cut off the cash

Faith Muthambi has stripped her director-general, Mashwahle Diphofa, of his powers, apparently for refusing to fund her imbizos. The minister of ...
News
5 years ago

A major ruling — but it may not end dispute

The victory this week in the Constitutional Court by former communications minister Faith Muthambi over e.tv may not mark the end of the long-running ...
Business Times
5 years ago