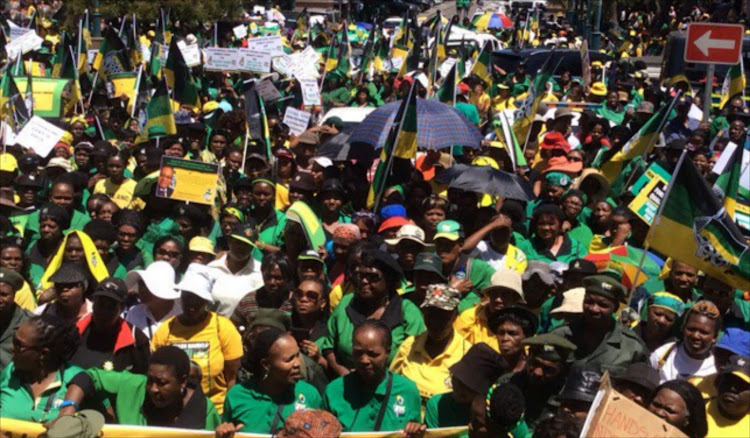 The ANCWL's held a march to call on the nation to respect President Jacob Zuma
Image: @ANCWomensLeague via Twitter

The ANC Women's League has been heavily criticised for being selective when dealing with women's issues.

"I don't think I'll give to you this ANC Women's League on a golden platter because nowadays‚ the ANCWL is very selective when it has to deal with issues of women. Women don't have projects in the ground because [some of us] think we have arrived isn't it?" said ANC national executive committee member Dikeledi Magadzi.

Magadzi was speaking to hundreds of people who had gathered at the Hlohlokwe Community Hall in Maruleng‚ Limpopo on Saturday afternoon for the Nelson Mandela Memorial Lecture.

Her remarks follow just days after ANCWL president Bathabile Dlamini said there were men in the ruling party who had committed acts far worse than former disgraced deputy minister of higher education Mduduzi Manana who resigned on Saturday.

Manana is currently out on R5‚000 bail after being accused of assaulting two women at the Cubana restaurant in Fourways‚ Johannesburg earlier this month‚ citing “extreme provocation” after one of women allegedly called him gay.

Manana also faces a disciplinary inquiry within his own party after the ANC national working committee decided he should be disciplined. Dlamini said men within the ANC must restrain themselves and that they can’t use the excuse of anger as a reason to abuse women and children.

"You expect the ANCWL to be very clear as they were when they dealt with the issue of [murder victim] Karabo (Mokoena). So with this one‚ they should have proceeded with the same trajectory to say irrespective of your position‚ this is what needs to happen‚" said Magadzi.

Mokoena was allegedly killed and burnt beyond recognition by her 27-year-old ex-lover‚ Sandile Mantsoe.

Magadzi encouraged the branches to vote for Deputy President Cyril Ramaphosa to take over the reins from President Jacob Zuma whose term comes to an end in December when the party holds its elective conference.

The ANC's integrity committee has been missing in action since the outing of Deputy Minister Mduduzi Manana for assaulting two women. Chris Barron ...
Opinion & Analysis
4 years ago

Zuma can learn from Manana: SACP