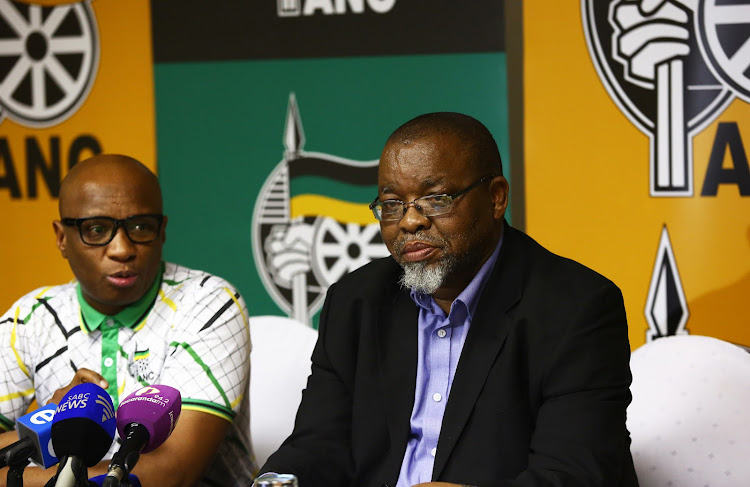 Secretary General of the ANC Gwede Mantashe sits next to ANC National Spokesperson Zizi Kodwa during a media briefing about the outcomes of the special ANC NEC meeting held at St Georges Hotel in Irene.
Image: Masi Losi

Leaders of the ANC in KwaZulu-Natal will know in three days whether or not they will be remain in charge of provincial structures.

Earlier this month the Pietermaritzburg High Court found that the 2015 KwaZulu Natal provincial conference which took place in November was unlawful.

Loyalists to former KZN premier and ex-ANC KZN chairman Senzo Mchunu challenged Zikalala’s election along with the rest of the provincial leadership‚ arguing that the process was unlawful.

The court ruling leaves KZN without a legally recognized top structure ahead of the December elective conference‚ unless the ANC choses to appeal the ruling.

'Kill to be a councillor'

Mantashe said the party was still considering its legal options and would make a decision by Tuesday.

"The NEC felt there was a need for further consultation with senior legal counsel to gain greater clarity on the decision of the court as it deals with Rule 17(2)(1) of the ANC Constitution and further engage the possibility of success in appealing the judgement‚" said Mantashe.

"We want to check with the senior counsel whether the interpretation of that clause is correct because if we are appealing that decision‚ the status of the Provincial Executive Committee (PEC) may change‚" said Mantashe.

He added that the party’s decision would be geared at finding unity.

Political killings in KwaZulu-Natal had nothing to do with Mangosuthu Buthelezi leaving the ANC Youth League several decades ago‚ the IFP leader said ...
Politics
4 years ago

"These decisions were underpinned by two primary considerations being to find a unifying solution and reasserting the authority of the ANC‚ rather than the courts‚ in the political management and administration of the issues confronting the ANC. We must ensure that at all times‚ when disputes arise within the movement‚ we must resolve them ourselves‚" said Mantashe.   If the party decides not to appeal the judgment‚ the provincial leadership structure will be dissolved.

Mantashe said if this happened‚ the ANC’s National Working Committee would establish a provincial task team to prepare for a new provincial conference which has to take place in a period of nine months.   The task team would consist of 15 top ANC members from all across the country.