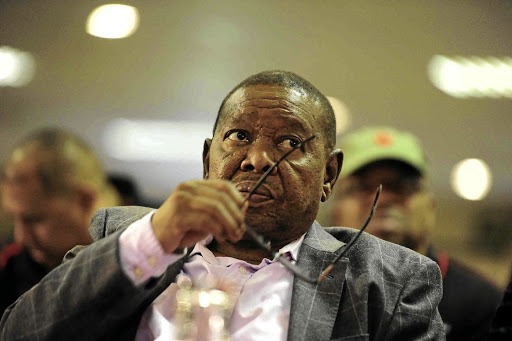 CUT The SACP's Blade Nzimande is out of the cabinet after President Jacob Zuma's reshuffle on Tuesday Picture: Thulani Mbele

If there was any doubt that President Jacob Zuma is a danger to South Africa's stability, his surprise cabinet reshuffle on Tuesday morning put paid to that.

A week before Finance Minister Malusi Gigaba's Medium Term Budget Policy Statement, Zuma made another round of inexplicable changes to the executive.

Gigaba has just been to the United States for International Monetary Fund and World Bank meetings where he tried to settle political uncertainty about South Africa ahead of the ANC's December conference.

South Africa is also due to be reviewed again by international credit ratings agencies next month after a round of downgrades following Zuma's last reshuffle.

But Zuma seems to have no qualms about accelerating investors' jitters about South Africa as he continues to move his chess pieces ahead of the ANC's elective conference.

The reshuffle would possibly have made some sense had Nkosazana Dlamini-Zuma, his preferred successor, been included in the cabinet.

But the only new face in the cabinet is ANC MP Bongani Bongo as State Security minister.

The primary aims of Zuma's reshuffle appear to be to finally give Blade Nzimande the boot and shift David Mahlobo to the Energy portfolio.

Nzimande has been living on borrowed time.

It was expected that he would have been axed along with Pravin Gordhan and Derek Hanekom in Zuma's cabinet reshuffle in March.

But he survived the midnight slaughter and, with the SACP, has continued to agitate for Zuma to step down as president.

It is understood that, at a recent special ANC national executive committee meeting, Zuma launched a tirade against Nzimande.

Over the weekend, speculation mounted that there would be a reshuffle on Monday. The word in ANC circles was that Buti Manamela would be shifted out of the presidency to become minister of higher education and training to replace Nzimande.

That would have been a cunning move to exploit the hostility and distrust between Nzimande and Manamela, previously close allies in the SACP.

Manamela's deployment as deputy minister in the department is still aimed at sowing discord in the SACP.

But the real cause for concern is Mahlobo's move to the Energy ministry. His appointment appears to be a last-ditch attempt to ram through the R1-trillion nuclear deal before a change of guard in the ANC.

Last week Gigaba gave assurances that South Africa would pursue a nuclear deal only if it were affordable.

Mahlobo has previously accompanied Zuma to Russia on unexplained business.

A few weeks ago, he was in Russia to facilitate a multibillion-rand gas deal between Russian company Rosgeo and the Central Energy Fund.

Ex-cons Kenny Kunene and Gayton McKenzie went along on the trip to line up as possible BEE partners.

'Good for Blade' but Zuma ‘should have reshuffled himself’: Malema

Zuma has moved Hlengiwe Mkhize from Home Affairs to the Higher Education portfolio after her inexplicable suspension of respected director-general Mkuseli Apleni. She is replaced by Ayanda Dlodlo who was unable to do Zuma's bidding in the appointment of the new SABC board.

After a protracted delay, the presidency confirmed the appointment of the new SABC board earlier on Tuesday, despite Zuma being unhappy with the names recommended by parliament.

Mmamaloko Kubayi, who was introduced to cabinet in March, takes over the Communications portfolio and will thus act as the chief messenger of the South African government.

Zuma has retained all the dead wood, non-performers and scandal-prone ministers in the executive, proving once again that he cares little about the effective operation of government and is driven only by political scheming.