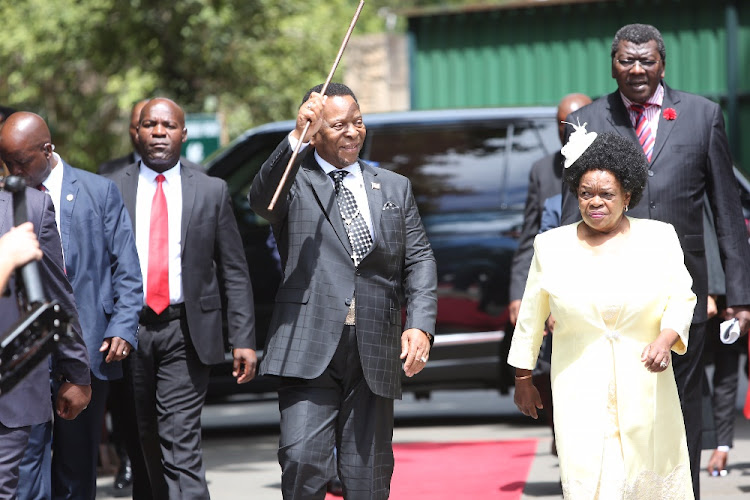 KIng Goodwill Zwelithini arriving at the opening of the KZN legislature in PMB.
Image: Jackie Clausen

Zulu monarch King Goodwill Zwelithini has described former president Jacob Zuma's decision to resign as head of state as an act of bravery.

He was delivering a keynote address during the official opening of the fifth KwaZulu-Natal legislature at the Royal Agricultural Showgrounds in Pietermaritzburg on Tuesday.

Zuma was also in the audience after he made a surprise appearance at the ceremony - his third public appearance after his resignation.

The king praised Zuma for putting the nation first‚ saying "it’s only a fool who would not accept Zuma's decision".

Former president Jacob Zuma made a surprise appearance at the opening of the KwaZulu-Natal legislature in Pietermaritzburg on Tuesday.
Politics
4 years ago

He said Zuma's decision to quit avoided "bad history which happens in other countries in Africa when political leadership wars end up being an impediment to the welfare of the incoming leaders".

"Doing something right is not cowardice but bravery. We thank you Nxamalala‚" he said to loud applause from guests and a smile from Zuma.

Zwelithini said Zuma's decision to relinquish power meant South Africa had a new president‚ Cyril Ramaphosa‚ who "must be given a chance to show what he has to offer".

He said that the cabinet reshuffle announced by Ramaphosa at the Union Buildings on Monday night had been expected.

"It was expected that there would be a change in ministers. That's the president's prerogative as per the Constitution. What we can ask for is that as he has done that as required by the Constitution‚ he will lead with the help of God as he took an oath of office and said 'So help me God'.

Zulu King Goodwill Zwelithini will pray for rain and better produce from the small and commercial farmers to address food security during the Amarula ...
News
4 years ago

He said what was important was to take the country forward and not backwards.

The king also revealed this week that during his private meeting with Zuma at his Ondini Palace in Ulundi recently‚ the former president had confided in him that he had taken the decision to resign after being recalled by the ANC.

The king also thanked the country's security forces for not interfering with the political processes around Zuma's removal.

"In all these days there are people we need to thank because it all depends on how you behave. I would like to thank the security forces for not showing their feelings."