Mahikeng residents call for Premier Supra Mahumapelo to step down 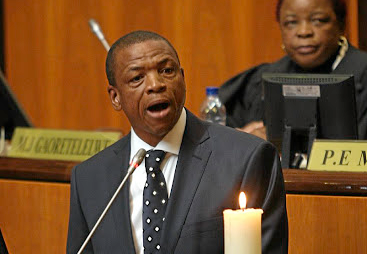 The community of Mahikeng in North West has taken to the streets to call for Premier Supra Mahumapelo to step down.

The Democratic Alliance (DA) in the North West is also calling on Mahumapelo to resign‚ saying he has “completely lost the trust of the people‚ and control of the province”.

Joe McGluwa‚ DA North West leader‚ says the protests have been ignited by‚ among other factors‚ the death of two patients outside the Monthshioa Clinic on Tuesday.

The two deceased could allegedly not get medical help due to an ongoing strike by health workers.

“This could have been prevented if Mahumapelo played his role as custodian of the people of North West. His tenure as premier has been marked by servicing his interests as well as those of the Guptas‚” he charged.

Medical staff in the province have been on a go-slow strike for weeks due to lack of resources and poor working conditions.

“The communities also conveyed their utter dismay with the R1-million bursary the premier’s son allegedly received from Denel. These communities are voicing their anger against the lack of service delivery‚ the state of our province and the inadequate health care they are subjected to‚” said McGluwa.

A bus and a building have been set alight & several roads have been barricaded near Mahikeng, by residents calling themselves the anti-Supra Mahumapelo group. They are demanding the immediate resignation of Mah umapelo #SABcnews pic.twitter.com/PmPRh6P11D

State-owned arms manufacturer Denel has denied that the R1.1-million bursary given to the son of North West premier Supra Mahumapelo was done in ...
News
3 years ago

North West Premier Supra Mahumapelo and Denel CEO Zwelakhe Ntshepe are facing a backlash over revelations that the premier’s son got a R1.1 million ...
News
3 years ago

North West premier Supra Mahumapelo may be removed from his position on Tuesday - that is, if his detractors within his own party have their way
News
3 years ago