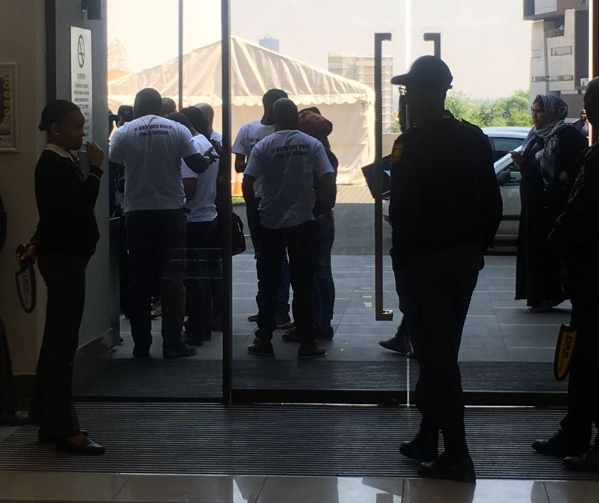 About a dozen BLF members have gathered outside the #StateCaptureInquiry and are demanding to be let in for the testimony given by banks about why they closed Gupta accounts.
Image: Karyn Maughan ‏via Twitter

A dozen Black First Land First supporters have gathered outside the venue where the state capture inquiry hearings are being held‚ but have been refused entry to the Hill on Empire building in Parktown‚ Johannesburg.

South African Police Services deployed outside the venue blocked the group of 15‚ wearing T-shirts bearing the words: “BLF says Absa must pay back the money.”

This happened while a representative from Absa‚ Yasmin Masithela‚ was testifying before the commission on why the bank had closed the bank accounts belonging to Gupta-owned businesses.

BLF deputy president Zanele Lwana accused the police of trampling on their rights as members of the public to attend the hearings.

She insisted that they were not there to disrupt the proceedings. But police officers stood their ground and refused to grant the group access.

“You’re looking at us as black people‚ and think we are going to disrupt. We have interest in this commission.

We have made submissions to this commission‚” Lwana said.

She said the BLF wanted the commission‚ headed by Justice Raymond Zondo‚ to be broader than its current terms of reference. After attempting to negotiate with individual BLF supporters‚ metro police officers were called in as backup.

About a dozen BLF members have gathered outside the #StateCaptureInquiry and are demanding to be let in for the testimony given by banks about why they closed Gupta accounts.
Inquiry staff and police are refusing to let them in. Security meeting outside Inquiry room. pic.twitter.com/zSI81Q5fE0

The Organisation Undoing Tax Abuse (Outa) has lashed out at state arms firm Denel in its first submission to the state capture inquiry.
Politics
3 years ago

State capture inquiry: How Parliament zoomed in on Standard Bank

Standard Bank’s head of compliance Ian Sinton says one of the bank’s chief executives was summoned to Luthuli House to explain its decision to ...
News
3 years ago