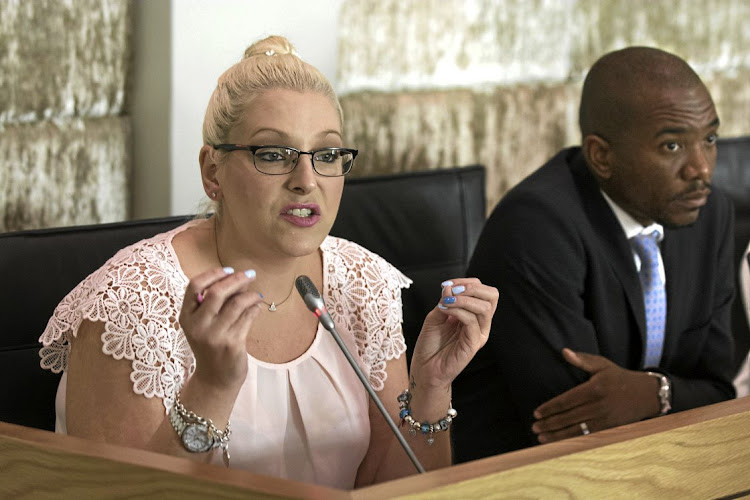 Responding to media inquiries about the report to be tabled at a Cape Town city council meeting on Thursday‚ Mazzone said it “points to continuous interference and misconduct by Patricia de Lille”.

A 2‚000-page report compiled over 10 months by law firm Bowman Gilfillans recommends that the city council consider laying criminal charges against De Lille‚ who will vacate the mayoral office on October 31.

The report‚ compiled by Bowman's director Randall van Voore‚ claims De Lille and former city manager Achmat Ebrahim broke the law when they failed to tell the council about irregular payments for bus chassis in 2015.

It also says the council is obliged to report suspected acts of corruption relating to a tender for electric buses and that the city take disciplinary procedures against mayoral committee member for transport and urban development Brett Herron and suspended transport and urban development authority commissioner Melissa Whitehead for their alleged misconduct in the tender process.

Cape Town transport officials were wined and dined in China by executives of an electric bus company that was “irregularly” awarded a R286m tender ...
News
3 years ago

Cape Town councillors will be asked to decide on Thursday whether to report mayor Patricia de Lille to the police‚ after a forensic investigation ...
Politics
3 years ago

Mazzone‚ who has been at the forefront of the DA's long-running battle with De Lille‚ said on Tuesday: “We‚ as the DA‚ have always maintained that this wholly independent investigation should be allowed to run its course so that the full extent of the governance breakdown in Cape Town under De Lille could be independently and fully investigated.

“We await and respect the outcome of Thursday’s council meeting where the results of this independent investigation are tabled.”

In a letter to city manager Lungelo Mbandazayo a week ago‚ Van Voore said he was asked to lead the investigation centred on the city transport authority on March 1‚ with 30 days to complete his work.

However‚ De Lille could not meet him until March 27‚ and the following day he sent her a batch of documents requiring her response.

He wrote to her again in April‚ May and June requesting her response‚ and eventually received a “preliminary” response from De Lille’s lawyer‚ John Riley‚ on July 27.

After two more months of waiting for her final response‚ he wrote to De Lille on September 27 giving her a deadline of Friday October 5‚ “failing which I would finalise the report”.

On October 3‚ Riley wrote to him saying De Lille had no further submissions.

De Lille responded to a request for comment saying: “I will release a statement after I have studied the report and consulted my lawyers.”

Money irregularly spent on security upgrades at Patricia de Lille’s home is set to be written off by the City of Cape Town.
Politics
3 years ago

Cape Town mayor Patricia de Lille has instructed her lawyers to pursue a defamation case against businessman Anthony Faul and sue him for R1-million.
Politics
3 years ago