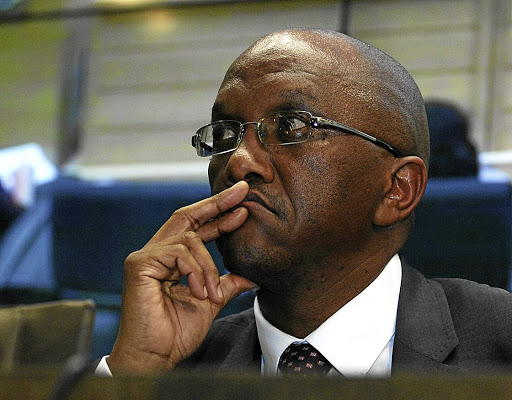 Thanks to new laws, auditor-general Thembekile Kimi Makwetu is able to issue certificates of debt against heads of departments and SOE board members — making them personally pay back misspent money.
Image: PUXLEY MAKGATHO

The auditor-general now has powers to hold heads of government departments and board members of state-owned companies (SOEs) personally liable for irregular expenditure that cannot be justified.

These are some of the new sweeping powers that have been given to AG Thembekile Kimi Makwetu after President Cyril Ramaphosa signed into law amendments to the Public Audit Act following years in which Makwetu's recommendations were simply ignored by those spending public money outside legal and procurement prescripts.

Presenting the audit outcomes for the 2017/2018 financial year at a media conference in parliament, which showed that government's irregular expenditure continued to rise and had reached R51bn, Makwetu said "gone are the days" where such spending would simply be dismissed "as a matter of procedure".

This year's irregular expenditure shoots up to R79.4bn if that incurred by SOEs such as Eskom and Transnet, which are not audited by the AG, are factored in.

Many in government have previously rejected criticism of rising irregular expenditure, claiming such spending did not mean that money had been stolen or spent in a corrupt manner. They claimed that in many instances, proper procedures could not be followed due to emergencies.

AG staff members have had to face a hostage situation‚ threats from municipal officials, being shot at and attempted bribery.
Politics
2 years ago

Irregular spending by national and provincial governments is continuing to rise‚ albeit marginally at one percent‚ from R45.3bn in March 2017 to ...
News
2 years ago

MPs, however, have begged to differ.

The new Public Audit Amendment Act provides for serious cases of irregular expenditure to be referred for further investigation, with the AG empowered to order binding remedial action, which includes recovery of related funds.

In cases where heads of government departments and board members turn a blind eye to his recommendations, Makwetu could issue a certificate of debt against them — and they would have to personally pay back the lost money.

"These powers then enable us, in addition to finalising the report, to specifically identify what we have defined in this amendment legislation as material irregularities that arise as a result of the audit," said Makwetu.

"So we will then try to separate the stuff that is about somebody who 'forgot because they had a bad day', from those that are systematic and are starting to be indicative of deviation from the system of internal control.

It comes at a time of sharing these audit outcomes so that we start moving away from this song that we've been singing for a quite a long time, which speaks to a lack of consequences.

"We think it's timely. It comes at a time of sharing these audit outcomes so that we start moving away from this song that we've been singing for a quite a long time, which speaks to a lack of consequences. We've now been given a set of powers to contribute something towards effecting consequence.

"We will be in a position to say that irregular expenditure sitting in those books was subsequently investigated, was followed up and these are the conclusions that were reached on it and these are actions that are proposed in the event that there's a need for a certificate to be issued."

Makwetu told of how there was also a growing tendency among civil servants to dispute some of the audit findings by his staff without any basis.

The auditor-general said that in some cases, some of his officials would find their car tyres slashed after those disputes.

The agency responsible for paying social grants to 17-million people has been hit with another qualified audit opinion for irregular spending of ...
News
2 years ago

"Some people have a tendency to get angry and start suggesting that the auditors started off with this opinion even before they started the audit. They start making accusations, wanting the auditor to be blamed for records that they themselves are supposed to be producing.

"Some people are funny; they just decide they're going to make your life difficult. You may be parked in a particular building where you're doing an audit and when you come out you find your tyres slashed."

Makwetu said 41% of public entities had budget deficits to the combined tune of R35.1bn, with the Road Accident Fund accounting for the bulk of it.

He said "urgent intervention" was required in the provincial departments of health, education and public works, which are largely responsible for bulk public infrastructure provision.

By end of August this year, Makwetu reported that 41 audits had not been completed, an increase from 26 in the same period last year. These included the outstanding audits of SOEs such as SAA, SA Express and Denel.

The provincial governments of Western Cape and Gauteng are the top two performers respectively.

The best performing national departments include communications, public enterprises, parliament, science and technology, and the office of the chief justice.