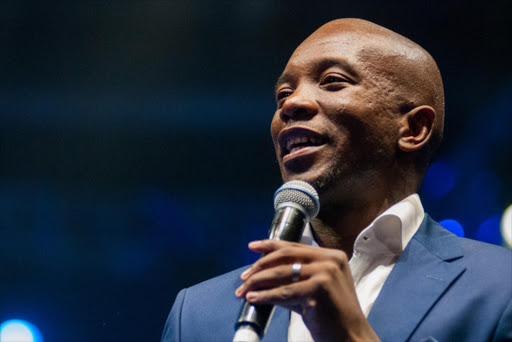 DA leader Mmusi Maimane says President Cyril Ramaphosa 'appears to have lied to parliament about receiving a R500,000 "donation" from a company - Bosasa - that has been bribing ANC officials for the better part of two decades'.
Image: Sunday Times / Waldo Swiegers

DA leader Mmusi Maimane has called on President Cyril Ramaphosa to publicly disclose his statement to public protector Busisiwe Mkhwebane regarding her investigation into the R500,000 campaign donation from Bosasa.

This comes after Ramaphosa's meeting with Mkhwebane yesterday, which stems from a complaint filed with her office by Maimane last year after the president made verbal and written statements to parliament that were contradictory regarding his son Andile's business contract with the controversial government service provider.

Maimane asked Mkhwebane to investigate whether Ramaphosa misled parliament during a question and answer session last year, when he stated that an amount of R500,000 paid into an account linked to Andile was a legitimate business transaction.

But Ramaphosa changed his tune a few days later in a supplementary note to speaker Baleka Mbete, saying the payment was a donation towards his 2017 campaign for the ANC presidency.

The Democratic Alliance has welcomed the decision by the public protector to accede to a formal request from the party to investigate a R500,000 ...
Politics
3 years ago

Now, following yesterday's meeting, Maimane says Ramaphosa needs to "play open cards" with the public about his statements to the public protector.

"The Democratic Alliance notes reports that President Ramaphosa will be voluntarily submitting a statement to the public protector, Busisiwe Mkhwebane, pertaining to her investigation into whether the president misled parliament about a R500,000 'donation' from Bosasa CEO Gavin Watson.

"In the interests of full transparency, the president should play open cards with the people of South Africa and make public his statement.

"South Africans must be fully assured that the president is not applying any undue pressure or trying to influence a sensitive investigation into allegations of wrongdoing on his part.

In the interests of full transparency, the president should play open cards with the people of South Africa and make public his statement.

"The allegations against the president are serious. He appears to have lied to parliament about receiving a R500,000 'donation' from a company that has been bribing ANC officials for the better part of two decades. Moreover, Ramaphosa told parliament that his son Andile Ramaphosa does lucrative paid work for Bosasa. All of this appears no different to every other bribe Bosasa paid to ANC officials.

"As the complainant in the matter, I will be requesting a meeting with the public protector in order to submit evidence and receive a progress report into the matter," added Maimane.

"It is vital that this investigation is prioritised and receives the due consideration it deserves."

The EFF has also put pressure on Ramaphosa to make a public statement on the Bosasa matter, saying his failure to do so would result in them disrupting his state of the nation address, scheduled for next Thursday evening.

Former president Jacob Zuma is alleged to have pocketed up to R300,000 per month from controversial government contractor Bosasa in exchange for ...
News
3 years ago

Bosasa wanted me to be unethical but I said no: PR boss Stephen Laufer

Media relations manager Stephen Laufer said he drew the line and cut ties with Bosasa after he was asked to undertake "unethical activities".
News
3 years ago

5 of the public protector's findings that made headlines in 2018

From expensive cakes to lying under oath, here are five of the public protector's findings that got people talking this year.
News
3 years ago