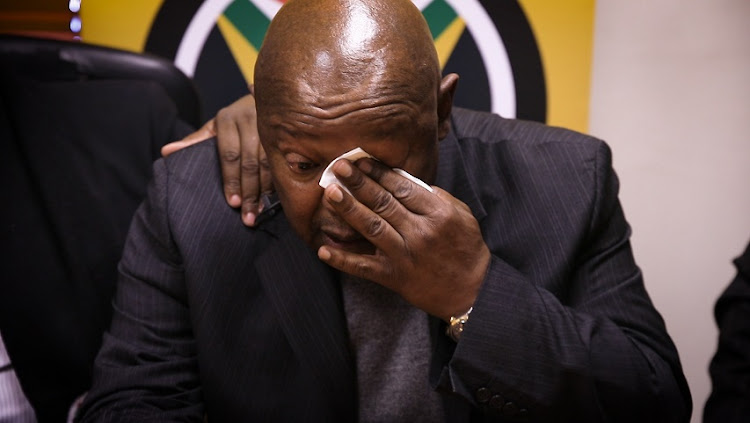 COPE leader Mosiuoa Lekota on Thursday suggested that while President Cyril Ramaphosa had vehemently denied having sold out comrades to apartheid security police, his explanation of what had transpired during that time suggested that he had in fact done what he had been accused of.

Lekota said Ramaphosa was essentially conceding to giving the apartheid police information on his fellow comrades.

COPE’s Mosiuoa Lekota speaks outside parliament after president Cyril Ramaphosa defender himself against “sellout” accusations made on Wednesday.
🎥: @ezaap pic.twitter.com/Hjiu7jOSTQ

Ramaphosa had earlier taken to parliament to quash shocking claims Lekota had made on Wednesday.

"I can testify I've never been a spy, I have never worked with the enemy. All I've ever done in my life is my commitment to the president of our country," Ramaphosa told parliament.

Showing his exasperation with the direction the debate on his state of the nation address (Sona) was taking, Ramaphosa said: "I was waiting for pearls of wisdom from our MPs, but instead of engaging seriously with matters of national importance raised in the Sona, several speakers used this platform for personal attacks, for vitriol and pontification," said Ramaphosa.

Ramaphosa went on to detail how he and other students leaders had been arrested for marching at the Mankweng police station in the former Lebowa area (which is now the Limpopo province) before he was transferred to Pretoria, where he was detained for six months.

"They started interrogating me, which was vicious, and I will not go into that. The issue that they wanted from me was to give evidence against accused number one, Saths Cooper, Muntu Myeza, accused number two, Terror Lekota, accused number 3, and a number of others. I refused," he said.

President Cyril Ramaphosa has denied claims made during the Sona debate that he was a spy in the early 1970s.
Politics
3 years ago

Ramaphosa said he refused to sell out his comrades, even after the security branch had tried to get his father, who was a police officer at the time, to get him to agree to turn state witness against his fellow activists.

Lekota said, however, that he had seen the incriminating statement made by Ramaphosa at the time.

He said after the state had closed the case against him and the other activists, their lawyers had advised them to seek the statements made by their fellow detainees. It was then, he said, that it had come to light that Ramaphosa had given information to the police about them.

"That is when we got that statement of his when he said we put the communist idea in his head. But it laid the foundation for the charge. They got other people [to also] do that," said Lekota.

"The statement he made to the police constituted the foundation of the charge sheet that sent us to jail. Even if he didn't ultimately testify, but his statement was one of the key documents that put me behind bars," he added.

He said following his release he and fellow detainees had focused their energy on building the country, adding that "there was no time to be pursuing revenge".

Lekota said he had only decided to become vocal about this after Ramaphosa had called him by name last week, inviting him to walk through the apartheid era journey with him.

Lekota said he couldn't do this.

"I had to explain to him why. If he hadn't asked me, I would have not [raised this issue]. It was not my priority. But it is important that I must say it," Lekota said.

President Cyril Ramaphosa responded to Cope leader Mosiuoa Lakota’s allegations that he was a sellout during his response to the Sona debate, on Thursday February 14 2019.

Health minister Aaron Motsoaledi has defended President Cyril Ramaphosa against claims that he sold out anti-apartheid student activists in the 1970s.
Politics
3 years ago