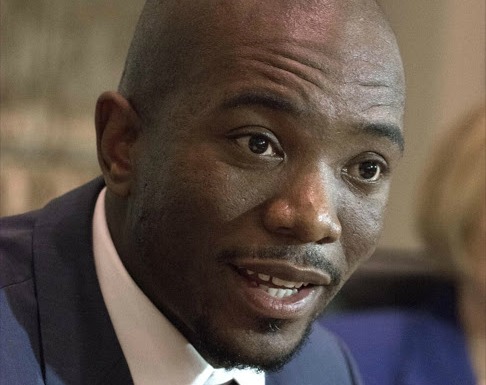 DA leader Mmusi Maimane has called for a special investigation into all Bosasa contracts in the wake of the Andile Ramaphosa revelations.
Image: Trevor Samson

DA leader Mmusi Maimane says "Bosasa is to Ramaphosa what Nkandla was to Jacob Zuma".

This comes after President Cyril Ramphosa's son Andile admitted to News24 in an article published on Wednesday morning that his consulting firm Blue Crane capital had received payments of R2m in a deal Ramaphosa junior described as a "severe oversight".

Maimane now says it is becoming increasingly apparent that there's possible corruption between the Ramaphosas and Bosasa.

The DA leader has also called for a special investigation into all Bosasa contracts.

Maimane has also written to the Zondo commission, asking deputy chief justice Raymond Zondo to summons Ramaphosa to testify before it over what he knows about his son's dealing with Bosasa before the May 8 elections.

"It's important that Mr Ramaphosa appears before the Zondo commission to respond to these questions because Bosasa is to Ramaphosa what Nkandla was to Jacob Zuma.

"I asked him twice in parliament about this particular matter. At first he told us one story then he had to change it. The second time when I asked him about the figures of the contract, he ... said that information is with the public protector," said Maimane.

Maimane first confronted Ramaphosa with the Bosasa issue in November 2018 during an oral question-and-answer session.

At the time, Ramaphosa said his son had received a R500,000 payment from Bosasa for services rendered by his company.

President Cyril Ramaphosa has been dragged into the matter with the public questioning whether or not he can be trusted.
News
2 years ago

But he later back-tracked in a letter to national assembly speaker Baleka Mbete, saying he had since learnt that the money went towards his ANC presidential campaign, a donation he had not been aware of.

Public protector Busisiwe Mkhwebane is probing the matter following a complaint from Maimane.

Maimane said it was not good enough for Ramaphosa junior to say he regretted his dealings with Bosasa.

"It's bit like creative accounting, it's called fraud. In other places it's called corruption. Frankly, Andile Ramaphosa has a consulting fee. Why are these sons of presidents getting consulting fees for what. We deserve to know, if there was nothing to hide why are they hiding the figures," said Maimane in reference to a redacted contract between Bosasa and Ramaphosa he had previously received following a PAIA application.

"They hid the figures, there are these payments, there's a president getting a donation. it's a triangle of corruption and I think it's about time he launched a special investigation into Bosasa."

Former Bosasa auditor Peet Venter is continuing his testimony at the state capture inquiry on Wednesday.
Politics
2 years ago

Here are some of the figures that Venter implicated in his testimony.
Politics
2 years ago