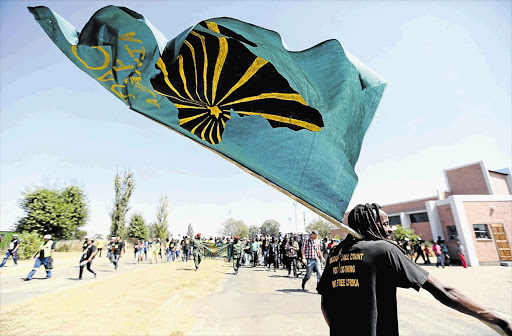 On June 10, Moloto unilaterally issued a decree to dissolve the national, provincial and regional executive committee.

He relied on a clause in the PAC’s constitution which states that the president has “emergency” powers to suspend the entire constitution of the PAC.

The reason Moloto gave for invoking the clause was to ensure that the national congress of the party was properly convened.

Moloto also removed all members of the national executive committee (NEC) who had been elected and appointed his own office bearers.

Moloto also decreed that the party’s national conference, which was to take place from August 29 to 31 in Bloemfontein would now take place on August 24 in Marble Hall, Limpopo.

The dispute had its genesis on May 18 when the NEC met and agreed that the date of the national congress would be August 31 and the venue would be in Bloemfontein.

The NEC meeting also agreed that all other administrative requirements of the congress would be attended by the secretary-general Apa Pooe, including logisitics.

On May 23, Pooe sent a letter to all branches communicating the decision of the NEC.

However, the national chair of the PAC, Phillip Dlamini, issued an internal eight-page memorandum on May 26 in which he took issue with Pooe’s letter.

Pooe responded to Dlamini’s concerns in a four-page reply on June 5.

Then on June 9, Moloto invoked the PAC’s constitution because, among others, the notice issued by Pooe had not been discussed by the NEC.

Following Moloto’s decree on June 10, Pooe - on behalf of the PAC - approached the court to set aside Moloto's decisions.

PAC president Narius Moloto on Thursday called for a "new deal on land" so that the blood shed by the victims of the Sharpeville massacre would not ...
Politics
3 years ago

Acting judge Anthony Millar on Friday said it was clear from Moloto’s letter of June 9 that the emergency he perceived arose from the belief that there had been no NEC meeting held.

“The NEC meeting held on May 18 2019 was completely ignored [by Moloto], even though he had attended it, and he proceeded on the basis that it had not taken place and that none of the resolutions passed at that meeting had any force or effect,” Millar said.

Millar said Pooe had acted in accordance with those resolutions and the mandate they gave him and proceeded to give notice for and arrange the national congress.

In his judgment, Millar said there was no “emergency” and no basis for invoking clause 14.2.

“The decisions taken by the NEC on May 18 2019 were validly taken and stand. The decisions taken [by Moloto] from the time of the invocation of clause 14.2 where these are inconsistent with those resolutions are set aside.” Millar said.

It was not a case of like father like son for an Eastern Cape dad and his offspring on election day on Wednesday as they made their marks for ...
Politics
3 years ago

Election season generally breeds optimism, but even pastor Alph Lukau would admit that it’s a bit of a stretch to expect the Pan Africanist Congress ...
Politics
3 years ago

Expropriating land without compensation will run into serious legal problems, which may take more than 10 years to resolve.
Politics
3 years ago