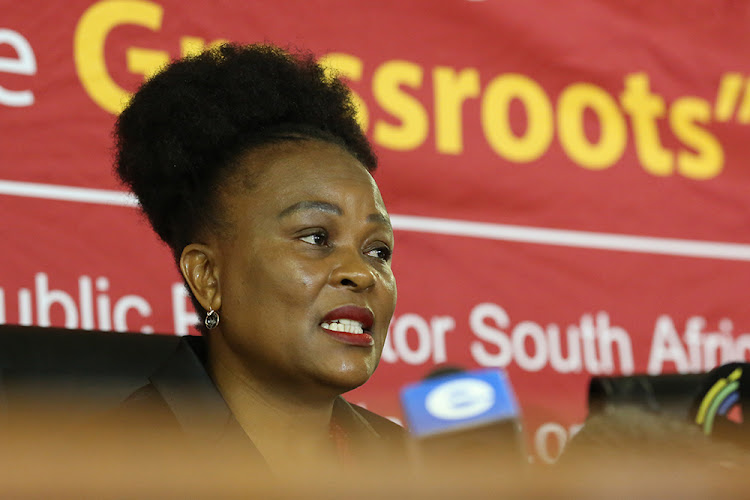 Public protector Busisiwe Mkhwebane delivers a report on July 19 2019 on allegations that President Cyril Ramaphosa had misled parliament and acted in violation of the provisions of the executive ethics code.
Image: Thapelo Morebudi/The Sunday Times

Banking group Absa has denied that it refused to cooperate with the public protector, Busisiwe Mkhwebane, with regards to her investigation into President Cyril Ramaphosa.

Mkhwebane asserted on Friday that her office had subpoenaed Absa to provide bank account information relating to her investigation into the president.

However, Absa denied receiving any such subpoena.

“We wish to place on record that Absa is not aware of such a subpoena and therefore has not refused to cooperate with her investigation,” said Absa spokesperson Phumza Macanda.

“In the past 12 months, Absa has received two subpoenas from the public protector and has, in accordance with the law, complied with them. These subpoenas did not involve any information relating to the president.

President Cyril Ramaphosa told public protector Busisiwe Mkhwebane that she did not have the jurisdiction to investigate the CR17 campaign that ...
Politics
1 year ago

Mkhwebane on Friday said that President Cyril Ramaphosa had misled parliament in his response to a question about a R500,000 donation from Bosasa for his presidential campaign in 2017.

DA leader Mmusi Maimane filed a complaint with Mkhwebane, asking her to investigate whether Ramaphosa had deliberately misled parliament in 2018 when he initially said the money was paid to his son Andile as part of a legitimate business transaction.

Releasing her findings on Friday, Mkhwebane said Ramaphosa had misled parliament and acted in violation of the provisions of the executive ethics code.

"President Ramaphosa's statement on November 6 2018 on his reply to Mr Maimane's question ... was misleading as he also conceded in his correspondence to my office, and even in his subsequent letter to the speaker of the National Assembly on November 14 2018, where he sought to correct the incorrect information he had provided in the National Assembly."

Mkhwebane found that the president "deliberately" misled parliament as he should have allowed himself enough time to research a "well-informed" response.

"I therefore find that President Ramaphosa's conduct ... although ostensibly in good faith, to be inconsistent with his office as a member of cabinet and therefore in violation of section 96(1) of the constitution," read Mkhwebane's report.

The DA has written to National Assembly speaker Thandi Modise proposing the establishment of an ad hoc committee to look into findings by the public ...
Politics
1 year ago

President Cyril Ramaphosa said it is “unfortunate” that public protector Busisiwe Mkhwebane did not take his response to her preliminary findings ...
Politics
1 year ago
Next Article