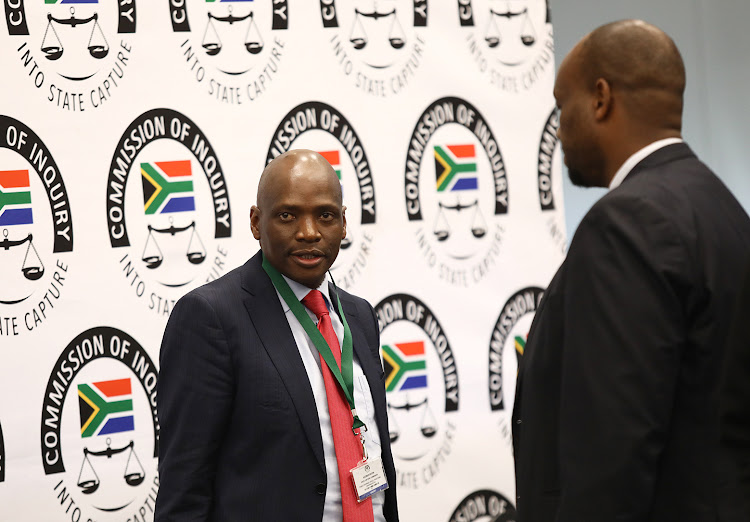 Former SABC COO Hlaudi Motsoeneng at the state capture commission on September 10 2019, where he is testifying on allegations made against him at the inquiry.
Image: Masi Losi

Former SABC executive Hlaudi Motsoeneng has admitted that he had visited the Gupta family's Saxonwold home so often that he cannot recount every instance - and that he enjoyed the curry there.

Motsoeneng was testifying at the state capture inquiry on Tuesday. He admitted to taking his group chief executive Lulama Mokhobo to see the Guptas at their request when she was appointed in 2012.

Mokhobo previously told the commission that Motsoeneng hurried her away from her desk about a week into her tenure and took her to the Gupta family's Saxonwold residence. At the house, she said Gupta brothers Ajay and Atul, along with Duduzane Zuma, lobbied her to allow them access to the SABC's digital channels.

"I went in together with Hlaudi. I do recall my phone and everyone else's phone was taken and the batteries removed. We then went into a dining room where the people present proceeded to congratulate me. I think it was Ajay, Atul, Duduzane Zuma and Ace Magashule’s son [Tshepo Magashule]," she told the commission at the time.

Former SABC executive Hlaudi Motsoeneng says he feels insulted when claims are made that he lied about his qualifications.
Politics
2 years ago

"They promptly told me they would have liked to play a role in SABC's DTT (digital terrestrial television) future because they were interested in creating a news channel and they would hope I would allow them to get access to a channel … I saw it as a lobbying of sorts for them to be afforded an opportunity on SABC platforms at that time."

Motsoeneng did not deny taking her to the Guptas, but said Mokhobo knew about the meeting beforehand.

"We enjoy curry there, big time chairperson, together. I was acting as the GCEO [group chief operations officer]. It was part of the handover. I said to her, 'look, compliance informed me there is this relationship between The New Age and SABC, but we as SABC are not complying because there is no memorandum of understanding on this matter. These people (Guptas), they talked to me to say they would be happy if we can meet your new GCEO'," he told the commission.

"I went to her [Mokhobo] a day before that morning she is referring to when I just came in and said let's go to the Guptas. No, we discussed, chairperson. In the morning, I went to her office and when I arrived I said, 'GCEO, I have some stuff I want to deal with at 10am.'  But we had already discussed it a day before. We went, chairperson … She was very happy. I was very happy myself. What happened there, we went and we ate breakfast."

Motsoeneng admitted the Guptas proposed they wanted in on the SABC's digital platform, but saw nothing wrong with their bid.

"They proposed like any business people. They said because you are going to migrate, we wish we can have channels in the SABC bouquet.

"There is nothing wrong with that. The concern is when you talk about the Guptas, people don't want to hear anything, they run away, they want to go under the table. The reality is we have met the Guptas, we have engaged them," he said.

"What [Mokhobo] was saying was not correct. When she was dealing with the issue it seemed like I went into her office, held her and said let's go ... She knew where we were going.

"The Guptas asked me if they can see her. We didn't fix the date. In the morning when I came I went to her office but she knew that that plan was already there to go to the Guptas.

"I went there (Saxonwold) more than I can't recount. I went there several times, I can't count. And I enjoy curry, chairperson, I can't lie."

A guest speaker does not an academic make, Wits Business School said in response to claims made by Hlaudi Motsoeneng at the state capture commission.
News
2 years ago

We knew Motsoeneng didn't have matric, but he had the skills: former SABC chair Ben Ngubane

Hlaudi Motsoeneng was a "troubleshooter" who had the skills the SABC needed for his chief operations officer - even though he did not have the ...
Politics
2 years ago

Former SABC chair Ben Ngubane told the commission that huge sums of money were wasted on content that wasn't flighted because it did not appeal to ...
Politics
2 years ago