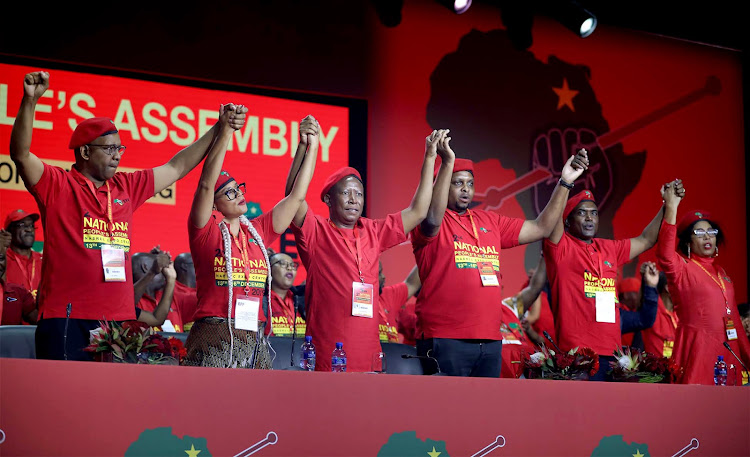 Fraud, defaulting on tithes and a failure to garner more than 100 votes are some of the key reasons the EFF had to fire some of its "fighters".

This is contained in the party's organisational report, delivered by secretary-general Gordrich Gardee during the EFF national elective conference, dubbed the National People's Assembly (NPA), on Saturday night.

The cases were mainly against the party's public representatives from three provinces. They have to appeal to the NPA to have their expulsions and suspensions overturned.

In one case, Amanda Kupa, from the Eastern Cape, wanted to be reinstated after she was sacked by the party for refusing to resign after she got less than 100 votes in an election.

Another case is that of Sandile Shange, who continued to receive a salary as an employee of the department of health in KwaZulu-Natal despite being an elected councillor.

Julius Malema will lead the EFF for at least the next five years.
Politics
2 years ago

"Mr Shange is a full-time employee of the department of health who contravened the Public Representative Code of Conduct in that he received two remunerations without prior authorisation by the MEC of health in terms of the Public Service Act, or by the organisation," reads the report.

Another KZN councillor, Khulezwa Hlabisa, committed a similar offence. Hlabisa continued to receive a salary as a teacher after becoming a councillor.

Cosmos Mabona from the Western Cape was sacked after failing to pay party levies 14 times.

Another EFF councillor from the eThekwini municipality, Lungile Mnguni, was kicked out of the party after being found guilty for accessing and misappropriating constituency funds.

EFF leader Julius Malema has lashed out at his party colleagues saying some who are elected into positions are not loyal to the EFF but to the ...
Politics
2 years ago

"She never attended her disciplinary hearing and was accordingly found guilty in absentia, and a sanction of expulsion was imposed," reads the report.

Addressing the media on Saturday night, Gardee said all the cases will be reviewed by a special committee to be set up by the NPA.

He said the committee's decision would then be heard by an NPA plenary, after which it will take a decision on whether to rescind or uphold the expulsions.

Thousands of EFF members were making their way into the Nasrec Expo Centre in Johannesburg on Saturday morning ahead of the party's elective ...
Politics
2 years ago

EFF deputy president Floyd Shivambu will have a cloud over his head this Christmas after the Cape Town magistrate's court on Thursday postponed his ...
News
2 years ago