'No, we are not all equal,' Magashule tells ANC councillor in verbal tiff 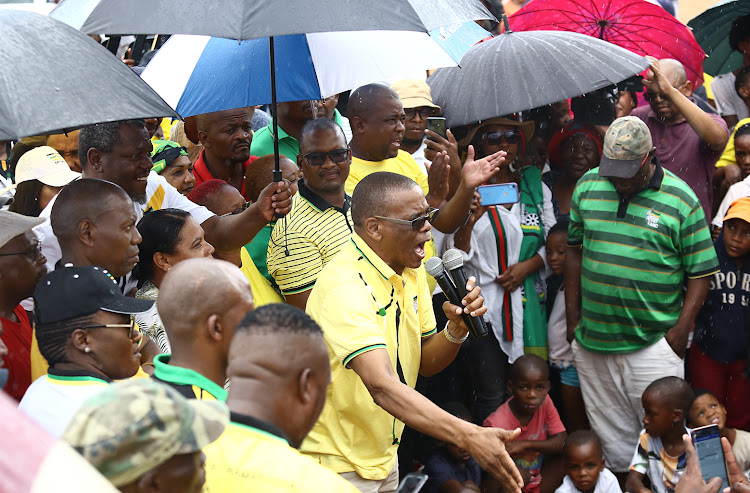 Ace Magashule addresses residents of Jan Kempdorp as part of a chaotic programme on Thursday that had to be abandoned. On a door-to-door visit he ended up in the wrong place and on another occasion his convoy had to turn back because the roads were impassable. He also got into a verbal row with a local ANC councillor.
Image: Masi Losi

Magashule, accompanied by national executive committee member Zweli Mkhize, was caught up in the factional battles of the Francis Baard region when warring factions pulled them in opposite directions.

This led to Magashule having to abandon a door-to-door visit at an informal settlement in the small town of Jan Kempdorp.

In the single house Magashule managed to visit in the informal settlement, he came head to head with ANC councillor Jackson Papaye who poured his heart out about his frustrations and corruption in the area.

Though Magashule listened attentively to the passionate Papaye, the conversation ended awkwardly with a dispute about whether all ANC members were equal.

ANC is sick but can still be cured, says David Mabuza

"We can’t come this far and betray our people now," the deputy president told a rally in Upington on Wednesday.
Politics
2 years ago

Papaye told Magashule how corruption and ANC regional factions had failed the community of Jan Kempdorp. “I have a big problem of electricity [provision to this area], there was R3m that was meant to install electricity here and another R4m that is coming,” said Papaye.

“I realised that there is fraud and corruption because it cannot be that there is more money added when we do not know what happened to the R3m.

Magashule promised to come back to the community but did not say when.

That was before he tried to go to more houses in the informal settlement but ANC local leaders started to physically pull him in different directions.

Magashule had to abandon the mission.

He went to another community for a door-to-door visit but was apparently at the wrong place. His convoy then had to turn back to visit the intended community where he visited two houses.

The confusion did not end there as the convoy had to be turned back in one of the areas in Jan Kempdorp because it had taken a route with impassable roads.

The ANC will use its January 8 celebrations to inspire hope at a time of unemployment and inequality, it says.
Politics
2 years ago

Tshwane speaker shoots down new bid for an ANC takeover

City of Tshwane speaker Katlego Mathebe has declined an urgent request by the ANC and EFF to hold a council meeting that would see the DA removed ...
Politics
2 years ago

"We can't say the ANC lives and the ANC leads while people live like this," ANC deputy secretary Jessie Duarte told local leaders at Galeshewe in ...
Politics
2 years ago