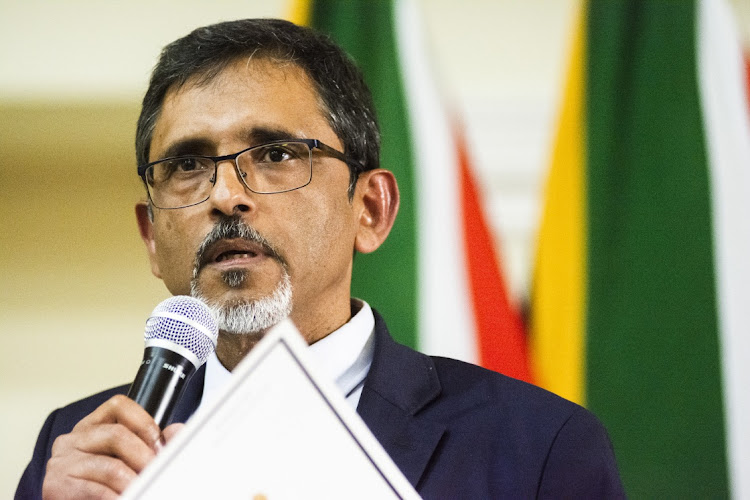 Trade and industry minister Ebrahim Patel's office has reiterated the minister's concerns about the way in which the pandemic has hurt South African businesses and the economy.
Image: BLOOMBERG/WALDO SWIEGERS

SA's trade and industry minister Ebrahim Patel is calling for a measured approach by all roleplayers on the economic impact of the Covid-19 pandemic and the lockdown. In this letter his office registers his concern that many firms in South Africa are in difficulty:

A series of recent comments and news articles give the impression that the minister of trade, industry and competition, Ebrahim Patel, has underplayed the extent of the costs Covid-19 and the lockdown will impose on the economy.

These include a recent Sunday Times editorial and statements made by the CEO of Business Leadership SA (BLSA). This is exactly the opposite of the truth.

The impression seems to be based on an interview on May 1 2020 that I facilitated between the minister and the Sunday Times, shortly after he had addressed members of Parliament on Covid-19 in a session that was broadcast live.

In the address to the parliamentary committee, he stated the pandemic has caused a massive and rapid shock to the economy, starting globally and transmitted rapidly to SA and the rest of the continent, with a dual impact on the demand and supply sides of the economy. He said the impact on gross domestic product (GDP) will be very significant,  with a projected recession with severe contraction of the economy in 2020, accompanied by big job losses and firm closures with high levels of social hardship.

Patel told the parliamentary committee : “Our work has indicated the pandemic will affect the South African economy in very deep and significant ways. The estimates of the impact vary. The work is still being done as we see the extent to which different parts of the economy are affected.”

He illustrated with estimates from the International Monetary Fund, the Reserve Bank and the Industrial Development Corporation, which projected declines in GDP of approximately 6%.

The journalist was aware of the remarks in parliament and had a copy of his presentation.

During the course of a lengthy interview, the minister was asked to comment on the quantitative projections of the impact of Covid-19 actions on the economy.

He made the self-evident point that it was too early to get a firm figure of the extent of the damage, with a range of projections by different economists, and that one of the numbers in the public domain referred to a lockdown-cost of about R13bn a day.

This, he pointed out, was simply based on taking the size of the GDP (about R5-trillion) and dividing it by the number of days in a year.

Such a figure is clearly at best a guesstimate of impact since the full extent of the cost would depend on a number of factors, and does not take into account that key sectors are working during the lockdown, including the agriculture and food-processing sectors as well as health care and parts of mining.

The subsequent media story, in our view, did not contextualise the reply adequately as it focused on only the minister’s cautioning of this particular estimate.

We did not correct the article, given other pressing demands on the time of the ministry related to the imminent shift to level 4 shutdown by a number of sectors and workers.

Given the large volume of media reports, this would not normally have much consequence. Little did we know that this story would get oxygen when commentators began quoting it.

Patel addressed a meeting of about 100 CEOs convened by BLSA on May 8 at which he stated the pandemic was likely to have a devastating effect on the economy, though the extent of the damage was not yet clear. He said  many firms in South Africa were in difficulty as a result of the current circumstances and millions of workers were without an income. Tellingly, the BLSA CEO was present at the meeting but was quoted extensively a few days later criticising the minister for failing to take the extent of the crisis seriously, based, presumably, on the original Sunday Times article.

The irony is that the minister has put forward the view on the devastating impact of Covid-19 on the South African economy since the declaration of the national disaster, pointing out already on March 24 at a media briefing that the pandemic will put strain on the economy, including small business owners and ordinary citizens, and called for all South Africans and corporates to pull together to ensure our people and economy come through this challenge with their lives, their jobs, their businesses, their livelihoods and their property intact.

We understand journalists are working under tight deadlines, that this interview was given on a Friday afternoon and that there is a need to condense massive amounts of information and nuance.

However, we place this on record with two purposes: first, to set the record straight that the minister recognises the very significant impact of the pandemic and the lockdown on the economy. But second, to call for a more measured set of public commentary given the enormous consequence on human lives if we get it wrong.

- Sidwell Medupe is spokesperson for the department of trade, industry and competition

Estimates by economists of how much the lockdown has cost the economy were a "thumb-suck", according to trade & industry minister Ebrahim Patel. He ...
News
2 years ago

'A government in disarray' on Covid

Take charge, Mr President, and focus your ministers' minds on what matters

No political leader wants to be blamed for causing many thousands of deaths. But if SA doesn't get more strategic about the lockdown, and speedily, ...
Opinion & Analysis
2 years ago