'Cost not the issue, saving lives is': Ramaphosa pumps R3bn into Covid-19 battle in Western Cape 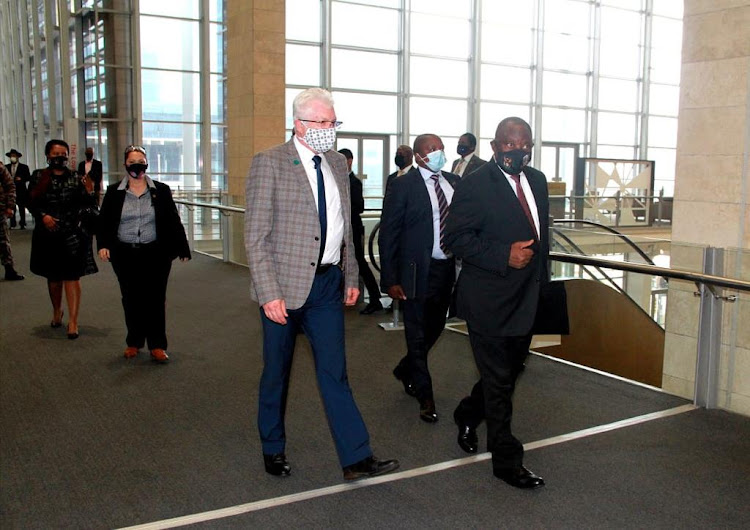 President Cyril Ramaphosa said money was not a problem when it came to fighting the surge in Covid-19 cases predicted to hit the Western Cape.
Image: Zwelethemba Kostile/GCIS

Never mind the cost, saving lives is what matters.

That was the message on Friday from President Cyril Ramaphosa to the Western Cape — the country's epicentre of Covid-19 deaths and infections.

Ramaphosa said to assist the province, which had seen more than 26,000 infections and at least 643 deaths by Thursday, about R3bn would be awarded to it from R20bn set aside to fight the pandemic in the country.

“Funding should never be an issue ... if it is, it will be a momentary problem. Three billion or so will be made available because you are the epicentre,” he told premier Alan Winde just before he officially opened the province’s biggest Covid-19 field hospital at the Cape Town International Convention Centre (CTICC).

The R47m hospital is expected to admit its first patients on Monday.

Ramaphosa, who visited the province with national health minister Dr Zweli Mkhize to check on its level of preparedness, said he was impressed with the work done, including the handling of hotspots.

Ramaphosa urged provincial authorities to recruit more staff, allocate more beds and tighten its hotspot strategy, which has already shown success in one of its rural districts, Witzenberg, to flatten the curve of infections.

The strategy needed to be replicated in other hotspots such as Khayelitsha. He said staff shortages and lack of finances should never be hindrance, stressing that SA “has to win this war at all costs”. “Cost is not the main issue ... saving lives is.”

Ramaphosa commended the provincial government for its co-operation with the national government, saying this proved it was part of SA and did not want to disconnect itself from the country as had been suggested by some.

Winde thanked Ramaphosa for the additional funding. He described the Covid-19 fight as a marathon which SA had just started running.

“We need to ensure that our front line in this war is well resourced,” said Winde.

President Cyril Ramaphosa has expressed his grave concern for the Covid-19 crisis unfolding in the Western Cape which has, by a long mile, the the ...
Politics
11 months ago

Premier Alan Winde said a decision had to be made after the backlog of tests in the public sector grew to about 27,000 for the Western Cape alone.
News
11 months ago

The City of Cape Town has now agreed to allow informal traders to operate during the lockdown, says the Legal Resources Centre
News
11 months ago
Next Article