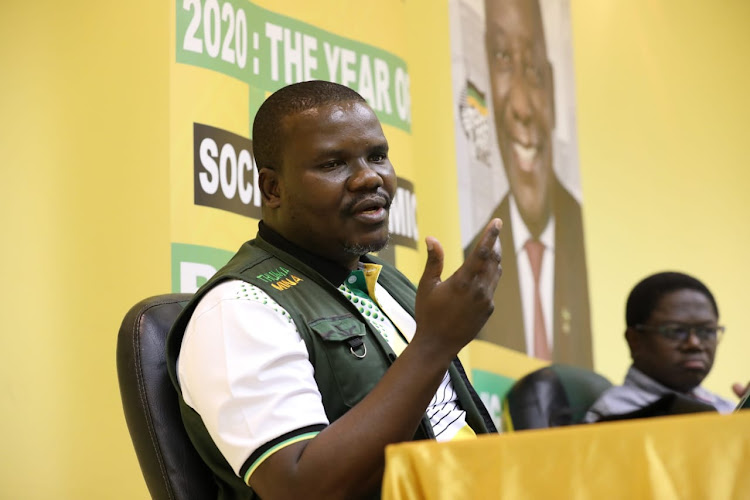 ANC KwaZulu-Natal secretary Mdumiseni Ntuli said an anonymous letter has made specific proposals and suggestions to the ANC as an organisation.
Image: Sandile Ndlovu

The ANC has extended an invitation to the author of an anonymous letter alleging abuse by three of its members to come forward and give evidence to a task team investigating the matter.

“The purpose of an investigation is to ascertain the veracity and truthfulness or otherwise of the allegations that have implicated comrades Jomo Sibiya, Sipho Hlomuka and Ntuthuko Mahlaba in an anonymous letter,” provincial secretary Mdumiseni Ntuli said on Tuesday following a provincial executive committee meeting on Monday.

The letter, dated June 28 and sent anonymously via e-mail to KwaZulu-Natal premier Sihle Zikalala and speaker of the legislature Nontembeko Boyce, contains allegations of women abuse against the trio.

Hlomuka, who is provincial co-operative governance & traditional affairs MEC, and Mahlaba, who is mayor of Newcastle, are said to have acted with provincial executive member Sibiya.

Ntuli said while the letter was addressed to the premier and speaker, the ANC decided to undertake an investigation as the letter made specific proposals and suggestions to the ANC as an organisation.

Provincial secretary Mdumiseni Ntuli announced that party veteran Willies Mchunu will lead an inquiry to get to the bottom of allegations against ...
Politics
1 year ago

The task team, which was established last week, followed allegations that Sibiya used his influence to get former lover Nokwanda Ndlovu arrested. Ndlovu, 23 was arrested in November on a fraud charge for allegedly posing as a medical student and working in a hospital.

Ntuli said the writer of the anonymous letter would also be expected to appear before the task team, and that he guaranteed the author's safety and security.

“Coming before the task team will guarantee her safety. This is a team of highly dignified leaders who will not divulge her identity. That team is highly responsible. They know why it is important to protect her identity.

“The provincial working committee task team should ensure the protection of the information presented to it including, where specifically requested, the identity of person/s involved,” said Ntuli.

Sibiya is  expected to appear before the task team to “share his understanding of the current problem, its origin and evolution”.

While the letter was sent via e-mail, it is understood the ANC didn't reach out to the author to provide evidence via the same e-mail address.

“We had no other means that we can imagine in terms of reaching out to her. We don't know the anonymous person. This is part of the public call we are making to reach out to her,” Ntuli said.

The ANC appealed to the anonymous person to come forward and contact Mchunu.

Ntuli also invited any member of the ANC who might have relevant information to help the investigation to come forward.

“Part of what she said (in the anonymous letter) is that only if the ANC guarantees her protection will she come forward. The assurance is that coming before the task team will guarantee her safety.”

Ntuli said Mahlaba and Hlomuka would be required to make their own presentations before the task team.

He said the task team would have to establish the veracity, the existence of the source of the letter and the allegations.

“Once the source and the allegations are put before the task team it is inevitable that Hlomuka and Mahlaba will also appear because they are heavily implicated in the letter in ways that, if they were discovered to be true, would have devastating implications on the standing and integrity of our movement,” Ntuli said.

He said the task team is required to present its findings and recommendations for consideration to the ANC provincial working committee by August 25.

Mental evaluation for KZN woman who posed as a medical intern

A 23-year-old KwaZulu-Natal woman, Nokwanda Ndlovu, will soon exchange her civilian clothes for a hospital gown.
News
1 year ago

Despite a major overhaul of our whistleblower legislation, SA remains an unsafe place for those who inform on wrongdoing in their workplace.
Opinion & Analysis
1 year ago