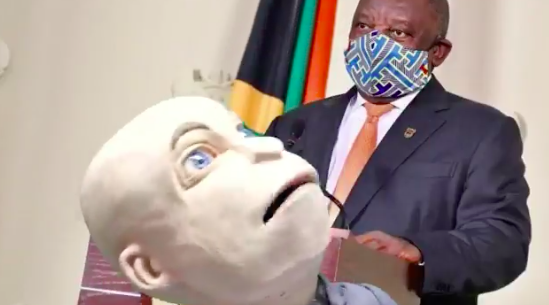 In a video shared on social media, Chester had quite a lot to ask the president and demanded he leads as a president should.

“We are probably the only country on earth where the president has its own show ... NetCyril,” said Chester.

“When is President Ramaphosa going to do question time with journalists after one of his briefings? Even Donald Trump did question time and then he attacked journalists. It was like he was the orange Ace Magashule.”

Chester asked if Ramaphosa would honestly answer the nation on the vaccine rollout and Eskom's load-shedding.

“When will Ramaphosa answer our question on why is our vaccination rollout so slow? Why do we still have load-shedding? And what does Deputy President DD Mabuza actually do?” Chester asked.

“DD Mabuza is like the Eskom customer care line. He doesn't actually do anything.”

Last week, Mabuza explained his much-criticised absence from the public at the height of the Covid-19 pandemic last year, saying he was taking care of his health and setting an example by encouraging people to remain indoors.

The puppet also lambasted Ramaphosa's stance on booze and banning alcohol sales, saying he should consider changing his name to “Ramaphuza”.

“He takes the words 'father of the nation' way too seriously and needs to calm down.

“He says he is acting against corruption but he acts in the same way as Maps Maponyane acts, no-one is in jail,” said Chester.

The controversial puppet has again taken the mickey out of the DA and party members in a skit mimicking Helen Zille.
Politics
1 year ago

'It's like if we sent Malusi Gigaba to run London and started calling it Norma for 200 years,' the controversial puppet says about the renaming of ...
News
1 year ago

Controversial puppet Chester Missing took the subject head-on, cracking a joke about those who chose to travel elsewhere because they aren't able to ...
News
1 year ago

WATCH | LOL! Chester Missing says puppets are 'last in vaccination queues' but he'll get the jab

“I choose to vaccinate because no matter how much Zam-Buk you rub on yourself, Covid-19 is not going to go away without real medicine, even if you’re ...
News
1 year ago