Health minister Dr Zweli Mkhize announced that 207,808 health workers had been vaccinated up to 6.30pm on Wednesday 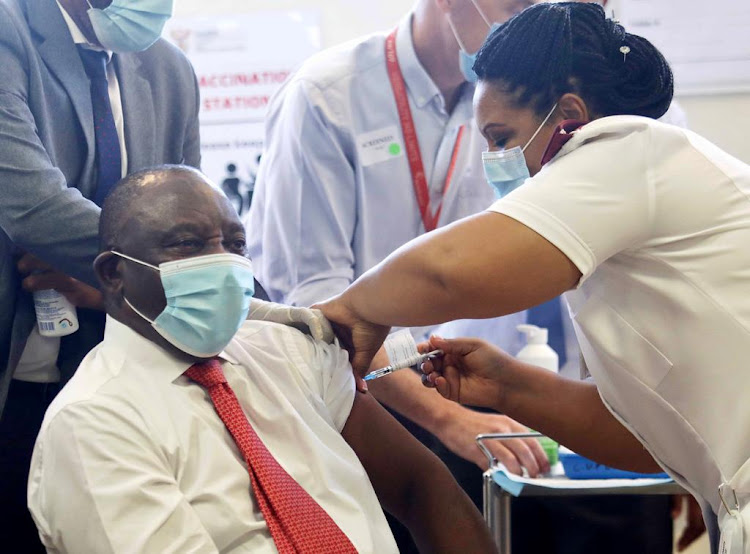 President Cyril Ramaphosa was among the first to be vaccinated in the middle of February. Since then, more than 200,000 health workers have received their jab.
Image: Esa Alexander/Sunday Times

Five weeks after the first Covid-19 vaccine was administered in SA, more than 200,000 health workers have now received their jab.

Health minister Dr Zweli Mkhize announced that 207,808 health workers had been vaccinated up to 6.30pm on Wednesday. This was an increase of 13,551 since the same time on Tuesday.

He also announced that there were 1,048 new Covid-19 infections and 121 Covid-19 related deaths recorded in the past 24 hours. This means that there have now been 1,540,009 confirmed cases and 52,372 fatalities across the country.

Of the newly recorded deaths, 38 were in Limpopo and the Free State, 24 in Gauteng, eight in the Northern Cape, five in KwaZulu-Natal, and four in both Mpumalanga and the Eastern Cape. There were no deaths recorded in the North West and the Western Cape.

The Covid-19 third wave: safety protocols, timelines and being prepared

Human behaviour will determine when SA will get the third wave of Covid-19 infections, according to health minister Zweli Mkhize.
News
1 year ago

British drugmaker AstraZeneca Plc may have provided an incomplete view of efficacy data on its Covid-19 vaccine from a large scale US trial, the US ...
News
1 year ago

Employees can be fired for flouting Covid-19 regulations, experts say

Legal advisors say employers can discipline workers who flout Covid-19 rules outside of work, but only if they have the relevant policies in place.
News
1 year ago