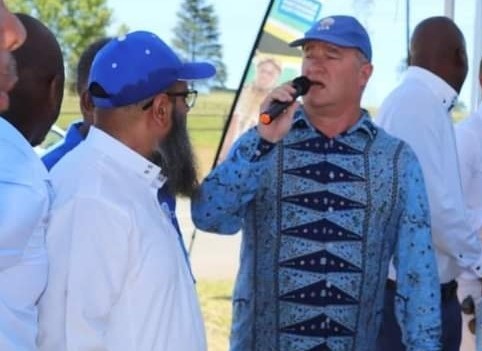 Francois Rogers after he was chosen as the new DA leader in KwaZulu-Natal on March 27 2021.
Image: Zimasa Matiwane

His biggest fear is failing to erode the ANC's electoral share, as he believes that will have disastrous consequences for SA.

His name is Francois Rogers and on Saturday he was elected leader of the DA in KwaZulu-Natal.

The 56-year-old's immediate aim is to continue growing the DA in the province, starting with electoral growth in this year's local government elections.

“We need to secure our existing votes but we also need to work in new and untested markets, otherwise the party will remain nothing more than a 20% party.

“That is my vision and that is my purpose,” Rogers told a news conference shortly after the new provincial leadership collective was announced.

"Some people were angry that their candidate lost in 2015. Instead of accepting democratic outcomes, they made all the attempts to unseat me from the ...
Politics
1 year ago

The new leader is a party veteran who started his career as the DA’s lone councillor in the Kokstad municipality, in rural north-western KZN.

Asked about the racial make-up of the elected leaders, Rogers said: “I don't think that is of any significance, at the end of the day we believe in fitness for purpose.

“What I really find encouraging from the delegates is that the deputy chairs and leaders are a young group of people from different demographics.”

Rogers said that was an indication that the DA in KZN is capacitating young people for the future growth of the party.

His biggest concern is local government. “If you look at the state of our municipalities under the ANC and some under the IFP, if it is not the DA nothing is going to change and if we do not start eroding that support I have grave fear for the future of our county,” he said.

He called on party members to move on from congress contestations and work together to ensure progress.

“As far as the party structures and elected leadership are concerned, I have absolute confidence that we will make the inroads that I am projecting for local government elections,” he said.

“We have an enormous task ahead of us, it is not going to be an easy battle. But if we collectively forget about the contestation, I believe we can produce the results we want in 2021.

“If there are forces within our organisation that want to destabilise us then they need to be exposed and isolated. We need to move on because without unity there is no stability, there can be no growth,” said Rogers.

As Herman Mashaba's Action SA prepares to contest key metros in Gauteng and KwaZulu-Natal the party said it has received over 500 volunteer public ...
News
1 year ago

KZN hit by spate of killings of traditional leaders

Traditional leaders in KwaZulu-Natal are bemoaning a spate of killings that appear to be targeting amakhosi and izinduna in the province.
News
1 year ago

DA fumes as Sihle Zikalala 'gets away' with 'flouting' lockdown rules

KwaZulu-Natal premier Sihle Zikalala will not face criminal charges for holding a gathering at Clairwood Hospital during level 5 lockdown in April ...
Politics
1 year ago