Former president Jacob Zuma on Sunday night gave the clearest indication yet that he was not prepared to listen to any advice from the ANC top six and the party's national executive committee (NEC) regarding his legal woes.

Asked whether he had met the party’s top brass this week following the judgment of the Constitutional Court, which sentenced him to 15 months in jail for contempt, Zuma responded: “Why should I meet them?”

FULL ADDRESS | Zuma speaks in Nkandla after meeting with lawyers

The ANC NEC postponed its meeting this weekend and deployed some of its members to Nkandla to talk to Zuma. It was also understood that the party’s top six were due to meet with the embattled former president.

The only two NEC members deployed in the province to set foot at Zuma's home this week were Lindiwe Sisulu and long-standing close ally, Tony Yengeni. Others, including Fikile Mbalula and Bheki Cele, had not shown up by Sunday night. 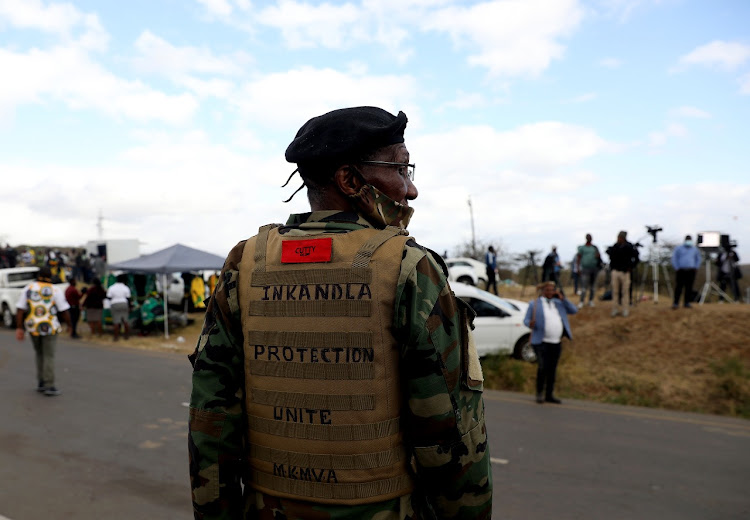 Speaking at a media briefing, Zuma said he had too much on his plate to worry about ANC officials and NEC members.

“I am in trouble… why should I meet them? Why should they not meet me?” asked Zuma.

Zuma frequently described himself as being sentenced "without trial".

This week he met the ANC KwaZulu-Natal chairperson Sihle Zikalala and provincial secretary Mdumiseni Ntuli in a marathon meeting that appeared to have been one-way traffic, with Zuma informing him of his stance against the ConCourt judgement.

Former president Jacob Zuma addressed the media at his homestead in Nkandla on July 4, 2021. Zuma said his prison sentence was, in effect, a death sentence as his poor health and the risk of Covid-19 could lead to his death demise inside a jail cell.

Zuma earlier on Sunday addressed his supporters, most wearing ANC regalia and singing pro-Zuma songs, with a distinct anti-Ramaphosa tone.

Zuma responded angrily when asked whether the events of this week outside his home were not undermining the authority of President Cyril Ramaphosa’s administration.

“Did I start any event? If it is about my name, is it my business? The Constitutional Court made a judgment. It is not me. Why then should I answer if it's good for the country or not?" he said.

Former president Jacob Zuma addressed a gathering - with many not wearing masks and little to no social distancing in place - on Sunday, thanking his ...
Politics
1 year ago

In their attempts to fight their way out of the corner Jacob Zuma was left in by the Constitutional Court this week, his supporters grasped at the ...
Opinion & Analysis
1 year ago