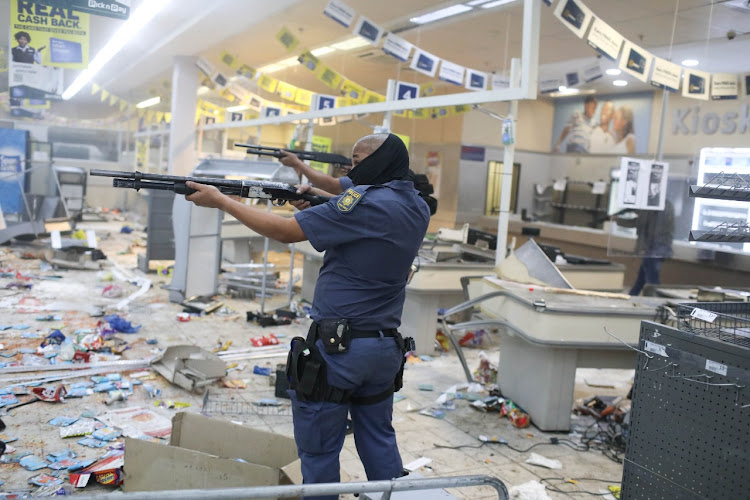 The violent protests and looting that broke out in the wake of former president Jacob Zuma's incarceration has cost the KwaZulu-Natal economy R20bn.

After Zuma's arrest earlier this month, his supporters began taking to the streets. This rampage — which included damaged property, setting alight factories and trucks and looting — spiralled into what government has since labelled a “failed insurgency”.

The protests moved to Gauteng, following a similar trend.

Addressing the media on Tuesday, acting minister in the presidency Khumbudzo Ntshavheni said the damage to factories and retail facilities will hurt the economy.

Citing figures from the SA Property Owners' Association, she said the estimates losses would be “R20bn in KZN”.

“That would be the effect on the KZN GDP,” said Ntshavheni.

She said further data would be collected on the protests in Gauteng.

“This effect will be felt both in KZN and across the rest of the country. Some production facilities have been damaged, though fortunately most factories and supplier facilities are intact. Work is under way to assess the damage to property as a result of the unrest,” said Ntshavheni.

She said the estimates of the total damage were provided to the government by the South African Property Owners' Association and were only for KZN at this stage.

She said a further 200 shopping centres were looted while more than 100 malls were burnt or sustained significant fire damage.

“In KZN alone they are estimating that stock to the value R1.5bn has been lost in Durban alone and 1,400 ATMs have been damaged, And 300 banks and Post Office outlets were vandalised, along with 90 pharmacies.

Ntshavheni said the economic cluster in the government is consolidating a package to intervene in the economy, especially targeting uninsured small businesses hit by the looting.

She further slammed the sharing of fake news related to the looting incidents across the country.

Residents in Phoenix, north of Durban, took up arms to protect their families and community violence and looting gripped areas in KwaZulu-Natal and ...
News
1 year ago

Zandile Gumede has denied having any involvement in the recent destruction and looting in KwaZulu-Natal and Gauteng.
Politics
1 year ago

Additional security measures were in place at Gateway Theatre of Shopping in Umhlanga, north of Durban, on Monday amid fresh threats of looting, ...
News
1 year ago