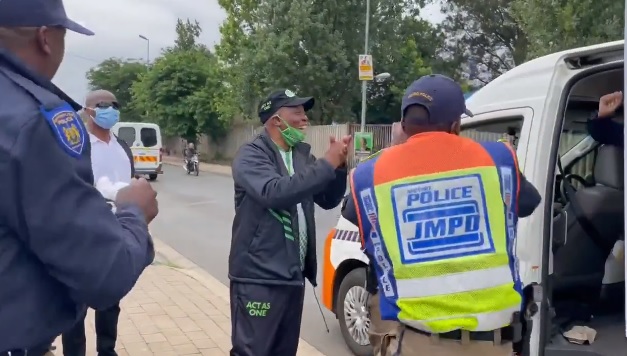 JMPD spokesperson Wayne Minnaar said officers were not allowed to publicly display or associate with a political when in uniform.
Image: Screengrab of video

The Johannesburg metro police department (JMPD) says it will investigate officers who were seen in a video dancing with ActionSA president Herman Mashaba.

JMPD spokesperson Wayne Minnaar said officers were not allowed to publicly display or associate with a political party when in uniform.

“Metropolitan police officers may be members of a political party, but cannot show association to that political party when they are in uniform,” Minnaar said.

In a video shared on social media on Wednesday, Mashaba is seen greeting a group of officers as they alight from a JMPD van.

The officers and Mashaba were seen dancing, clapping and singing in the video.

“The JMPD is acting swiftly in dealing with this matter. If there is evidence of  such misbehaviour, the members concerned will have to appear before a disciplinary committee where a presiding official will hear the case and determine an appropriate sanction for such misconduct,” Minnaar said.

In a wide-ranging discussion on 'Eusebius on TimesLIVE', ActionSA's mayoral candidate for Johannesburg, Herman Mashaba, engaged Eusebius McKaiser on ...
Politics
8 months ago

Political newcomers ActionSA have cautioned voters against casting their ballots for criminals and anarchists who were masquerading as established ...
Politics
8 months ago