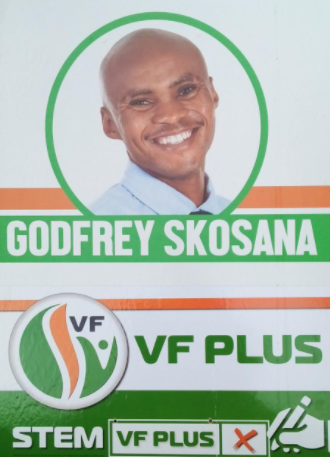 Godfrey Skosana said the Freedom Front Plus may not have won the elections but they will use the next few years to prove themselves to the community of Sephaku, Limpopo.
Image: Supplied

Godfrey Skosana, from the agricultural village of Sephaku in Limpopo, shocked many when he began campaigning to be a councillor under the Freedom Front Plus (FF+). And on Wednesday told the Sunday Times Daily that while he didn't emerge victorious, the hard work started now in preparation for the next election.

After weeks of campaigning and explaining how his party intended to serve and develop the rural and agricultural area, the FF+ ended up third in Monday's election, garnering 14.22% of  the votes.

Other parties, such as the EFF, bagged less than 10% of the total vote.

Skosana said he was not disappointed or discouraged by the numbers. Instead, he said, the numbers showed there were a significant number of people who believed in him, his party and what they stood for.

He said the FF+ could have done better.

“I saw where the faults were and we learnt a lot of lessons as people who were contesting this area for the very first time,” he said.

Asked what those lessons and shortcomings were, Skosana said voters needed to be properly educated on what the ballot paper looks like, what each ballot paper means and how to properly cast their vote.

Skosana said that after the voting, he found out that it was difficult for a lot of the elderly people in the area to remember how they should recognise the FF+ on the ballot paper.

“For the youth, I think many of them made mistakes on the ballots because what I saw was that there were quite a few spoilt ballots. Some of them came to the voting stations with the notion that they are young and educated and would know how to cast their vote so they didn’t ask questions beforehand.

“They just filled out the ballots and where they made mistakes, they tried to rectify it, spoiling the ballot,” said Skosana.

He described these as small teething problems which they would have attended to before the next election.

“I am definitely contesting in the next election but in the meantime, we need to continue with the plans that we had for the people that we promised,” Skosana said. “We still have to achieve this. Losing these elections means we won’t have public funds to deliver on some of the things that people in this community need but nothing is stopping us from now going for funding from the private sector. We cannot disappoint the people who did vote for us so we need to show them we are true to our word,” he said.

“I have no idea where we will get the funds from but we need to start acting and ensure we do something for this community each and every day,” he said.

Speaking to the Sunday Times Daily ahead of the elections, Skosana said the FF+ held the greatest potential to resolve the problems in the area.

He called on locals to give the party a chance, albeit there were misconceptions that it was a party that focused on the white minority. Skosana said it may be viewed that way — but that was only because it was the minority that was voting for them.

“We can't keep on sidelining white people on the basis of them being white, while we are welcoming of non-documented Africans in our country. These ...
Politics
1 month ago

“We don’t deny that it's a party for white people, but we want change and to show that we are a democratic nation living in a multiracial country. We should try to get change in this manner.

“We cannot keep on sidelining white people on the basis of them being white, while we are welcoming of other, non-documented Africans in our country. These are documented, white people who are South Africans. We cannot build SA in this manner,”  he added.

Skosana had said as things stood in Sephaku, service delivery was non-existent.

“As people who are in the rural areas, the only way to boost our economy is to focus on agriculture, but no other party prioritises this though we are in an agricultural community where many people own cattle, goats, sheep and chickens,” he said.

Among his plans is to encourage the youth of Sephaku to stay in the village and play a part in developing it instead of seeking greener pastures elsewhere.

“If we don’t stand up as the youth, nothing will change,” he said.

UPDATE | Elections 2021: Significant swings overnight as the battle for SA’s metros draws to a close

As of Thursday morning, five of the country's eight metros will not have an outright winner, paving the way for vital coalition talks.
Politics
1 month ago