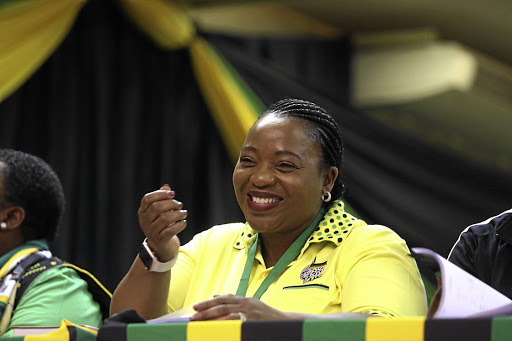 Nomusa Dube-Ncube has been endorsed by the ANC Women’s League (ANCWL) in KwaZulu-Natal for the position of ANC chairperson. File photo.
Image: Thuli Dlamini

The ANC Women’s League (ANCWL) in KwaZulu-Natal has endorsed Nomusa Dube-Ncube for the position of ANC chairperson at the province’s upcoming elective conference.

“The ANCWL PEC pronounce itself on the ANC leadership in the province by preferring comrade Nomusa Dube-Ncube to contest for the chairperson position in the ANC, comrade Nomagugu Simelane as deputy chair, comrade Bongi Sithole-Moloi as deputy secretary and comrade Peggy Nkonyeni as treasurer respectively,” said Gabela.

The position is currently held by Sihle Zikalala, while Dube-Ncube is the provincial treasurer.

The ANC wants all its provincial conferences to take place before its policy conference around June/July, say party insiders.
Politics
6 months ago

The women's league decried the lack of women, adding that their stance was addressing the shortage of women in leadership positions and tackling gender-based violence.

“The ANCWL PEC endorsed the names of the above comrades because it believes that they are mature and dedicated cadres capable of taking the ANC in the province to greater heights,” Gabela said.

She added that while the league was open to lobbying to discuss names of preferred leaders, it has made up its mind on who to elect as their leaders in the ANC.

“The PEC believes that for them the struggle to destroy patriarchy requires women to be more assertive, brave and fight for their space and rights in the movement,” she added.

ANC president Cyril Ramaphosa said on Sunday that the governing party needed to close ranks and defend the gains of democracy.
Politics
6 months ago

An ANC eThekwini ward councillor, Minenhle Mkhize, was gunned down in a hail of bullets on Saturday night, his party has confirmed.
Politics
6 months ago