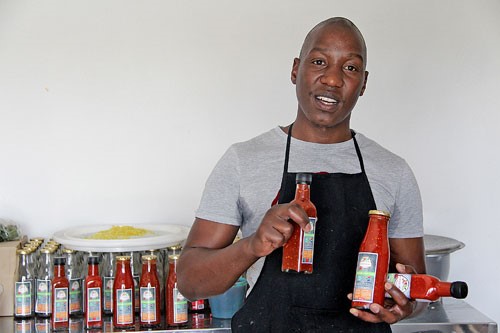 Nkosi Phungula can be described as a serial entrepreneur focused on growing his chilli sauce business.

At this year’s eThekwini Municipality’s Business Fair, Phungula walked away with R19 000 for the Best Exhibition Stand.

On top of this he was approached by the Inkosi Albert Luthuli International Convention Centre to supply his lemon and herb sauce. Phungula said that when he started Foodie Kings he had only R30 in his pocket.

“I did extensive research about the chili sauces on the internet. I then decided to take, leap of faith and started the business.”

He began with his original chili sauce using cayenne pepper and people love it.

“I approached the uMzumbe Municipality for a business development grant because I wanted to buy an industrial machine that would be used for crushing and cooking in preparation for the sauce.”

He adds that he produces about 1 500 bottles of chili sauce a day.

“I have employed two people who are assisting me. I decided to use a co-operative owned by women in uMzimkhulu who supply us with chilies just to support other black businesses,” he said.

Phungula said running a food business has its own challenges because one needs to comply with health regulations.

Phungula said even though the business started off slowly, he knew that it would grow one day.

How to become a cargo or freight handler

The primary responsibility of a cargo handler is to supervise the loading and unloading of all consignments. They play a pivotal role in the economy ...
Features
3 years ago

You might have experienced technical glitches when applying for the Funza Lushaka Bursary but thanks to a new and improved online system this will ...
Features
3 years ago

This is the belief of food garden expert Amon Maluleke. “If the majority of South Africans started growing their own vegetables, immense strides ...
Features
3 years ago