'It's gonna be a great, exciting fight' 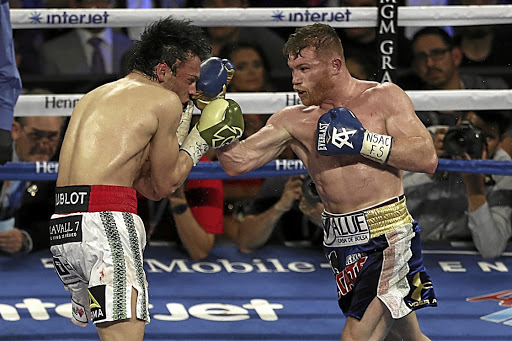 This assertion was made on Wednesday by Australian-based South African boxer Lovemore "Black Panther" Ndou, for whom one of his 13 losses - against 49 wins and two draws - was to Alvarez when they fought for the WBC Silver welterweight title in 2012.

"I have my money on Canelo," said the former IBF junior welterweight and IBO welterweight champion, who has been living in New South Wales since 1995.

The South African, now a practising attorney, said he thought the fight at the T-Mobile Arena in Las Vegas, billed the "Fight of the Decade", would be a thriller.

Alvarez, 27, has captured the WBC and WBA belts in the junior middleweight and WBO belt in the middleweight classes.

He has a single loss, to Floyd "Money" Mayweather, against 49 wins with 34 knockouts.

The 35-year-old Super champion, who is based in California, is undefeated in 37 fights and has 33 knockouts.

"I think it's gonna be a great, exciting and competitive fight," said Ndou.

"It will be way better than the recent Floyd Mayweather versus Conor McGregor circus. I rate Canelo as, pound for pound, the best fighter in the world now that Mayweather has retired again. He has never disappointed in all his fights. Golovkin, on the other hand, struggled against a smaller man in Kell Brook, who moved up two divisions to fight him.

"Golovkin also struggled against Daniel Jacobs. I personally had Jacobs winning that fight."

Ndou added: "Canelo is a natural, talented all-round fighter, whereas Golovkin is one-dimensional. Golovkin relies on punching power but he will need more than that against a seasoned fighter of Canelo's calibre, who also happens to have a strong chin.

"If he gets caught with the same punches he was getting caught with in the Brook and Jacobs fights he will get stopped.

"One can never underestimate Canelo's punching power. My prediction is Canelo by knockout in the second half of the fight or by points."

The fight will be televised live on Supersport2 from 2am.