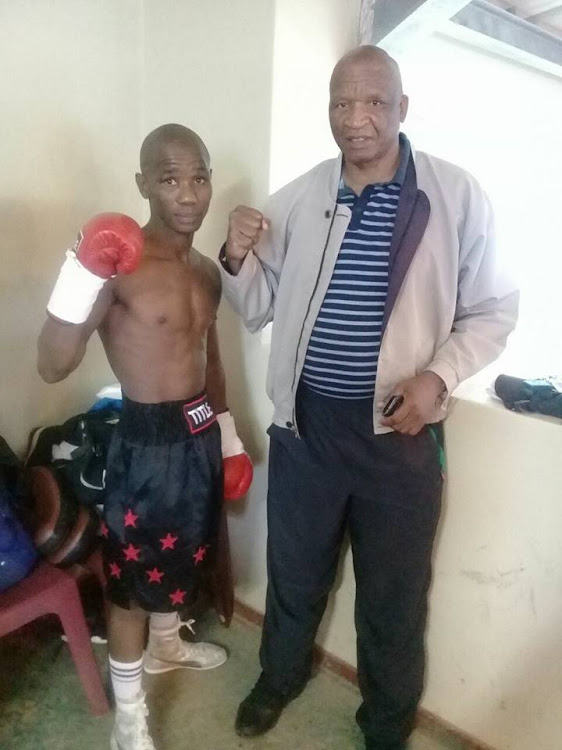 A boxer Sinethemba Magibisela (L) was stabbed to death during a robbery on 25 September 2017, a day after he had won a six-round match.
Image: Mfundo Bota via Facebook

Two boxers were stabbed in separate incidents at the weekend‚ one to death and the other was left fighting for his life in hospital.

A day after chalking up a points win over six rounds against Mbulelo Nxazonke in Willowvale in the Eastern Cape‚ Sinethemba Magibisela was stabbed to death in his hometown King Williams Town on Sunday.

Matchmaker Luyanda Kana broke the news to TimesLIVE and he said the 30-year-old Magibisela was with his friends at the time of the attack.

"Then as he was walking back home‚ he was attacked and stabbed. He died on the spot‚" Kana said.

Mzuvukile Daniels is fighting for his life in the ICU award at the Livingstone Hospital in Port Elizabeth after he was also stabbed on Sunday.

Boxing SA chairman Muditambi Ravele said she could not wrap her head around the senselessness of the two incidents.

"This is so sad‚ two of our licensees stabbed in one weekend‚" said Ravele.

"We have just ran a symposium in East London and one of the things we discussed there was that boxers need to look at places they frequent.

"The story I got is that his friends called to celebrate his win and he later got stabbed to death.

"All I can say it is really very sad to lose boxers in such a violent manner.

"I am not ware of the second incident involving Daniels.

"Our government has to do something about crime."

Other boxers who have been stabbed to death:

- Mzukisi "Laciar" Sikali. The former three-weight champion - junior flyweight‚ flyweight and junior bantamweight - was stabbed to death after he attempted to fight off a couple of muggers in Uitenhage near Port Elizabeth in 2005.

The left hander‚ who was regarded as one of South Africa's top boxers‚ lost his mobile phone during the attack but it was later recovered from his attackers after they were arrested an hour after the incident.

- Mandisi Sizani‚ who campaigned in the junior middleweight division‚ was stabbed to death by a group of thugs in Mdantsane in 2003.

He was allegedly encircled by thugs who stabbed him several times‚ leaving unconscious on the ground. He was rushed to Cecilia Mkiwane Hospital where he died on his arrival.

- Lundi Madondile was stabbed to death in 2012. Apparently he hosted a party for a friend at his place in Scenery Park.

He then went to sleep and an identified assailants walked into his room and stabbed him twice in the chest. Madondile died in Frere Hospital.

- Phenduka Kolisi‚ a promising junior flyweight fighter‚ was killed in a shebeen in Mdantsane last year.

- Lwando Molwana‚ who campaigned in the featherweight class‚ died after being stabbed in a shebeen in Cape Town.

Jake LaMotta, the former world middleweight boxing champion who died on Tuesday at the age of 95, was raised on some of the meanest streets in New ...
Opinion & Analysis
4 years ago