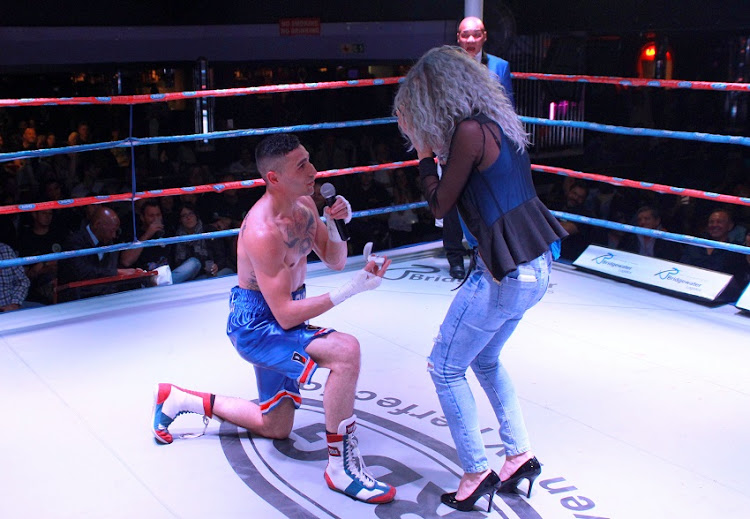 Mark Farah‚ rated No.7 in the junior middleweight division‚ is undefeated after four fights.
Image: Supplied

Mark “ThinkerBell” Farah – who went down on one knee and proposed to his girlfriend inside a boxing ring in Boksburg on her birthday last month – has promised to retain his unblemished record on October 22.

The 26-year-old crowd favourite trained by Alan Toweel Junior‚ who is a cousin to Farah’s father‚ will face tough-as-nails Congolese Jeff Otiombio at Blairgowrie Recreation Centre‚ where Supreme Boxing Promotions will stage an eight-bout tournament.

Farah‚ rated No.7 in the junior middleweight division‚ is undefeated after four fights.

“I will be involved in my first fight against a southpaw and I know how difficult it is to face a left-hander but I am gonna be victorious‚” he said on Tuesday.

“There is no doubt about that. It is a big one for me but I have been sparring against a left-hander‚ Jeff ‘911’ Magagane‚ and I have learnt a lot from him because he is a very intelligent boxer who makes you think all the time.”

Farah – who proposed moments after defeating Welcome Malumbu at Presley's Night Club to girlfriend Sharne Gerhardt – said sparring against Magagane enabled him to learn to move to the left.

Fighting a left-hander is a mammoth task to even seasoned boxers. Right-hand leads traditionally are viewed as an effective tool for right-handed boxers against left-handers‚ whereas they are far more difficult to land a punch against another right handed fighter.

Part of the left-hander’s advantage is the awkward position they impose on a right-handed fighter. The usual right-versus-right symmetry is not there.

The problem is further compounded by the fact that since there are far fewer left-handers than right-handers in the world‚ the right-hander is always at a loss experience-wise when compared to the left-hander.

Common problems when knife-fighting a left-hander‚ which can also relate to boxing‚ are:

* knives on the same side ("mirror image") can cause confusion and stress;

* traditional angles of attack and defense rendered ineffective or awkward;

* the knife hand is a closer target and more vulnerable;

* the off-hand (live hand) becomes less effective due to the distance from weapons; live hand checking‚ passing and parrying is harder;

* Knowing that the opponent is left-handed (and has an advantage because of it) may cause stress in itself - at least in a real knife combat situation!

Farah was paralysed and could not walk for two years.

“I was going for a header during training when I played for Tyler Junior College soccer team in America. I went for a header and went down. I could not feel my leg and I was told I would never walk again‚” he said.

“Three discs slipped in my spine. I was also in pain every day of my life. I had to slide around the pillow for three years.

“I started fixing myself by doing some exercises. I started crawling. I then started walking slowly and it was a battle and I have now been walking for three years.

“It was painful and I got used to pain. I started boxing a year ago. I put my first pair of gloves. I got my license this year and have four fights in four months and I am undefeated."