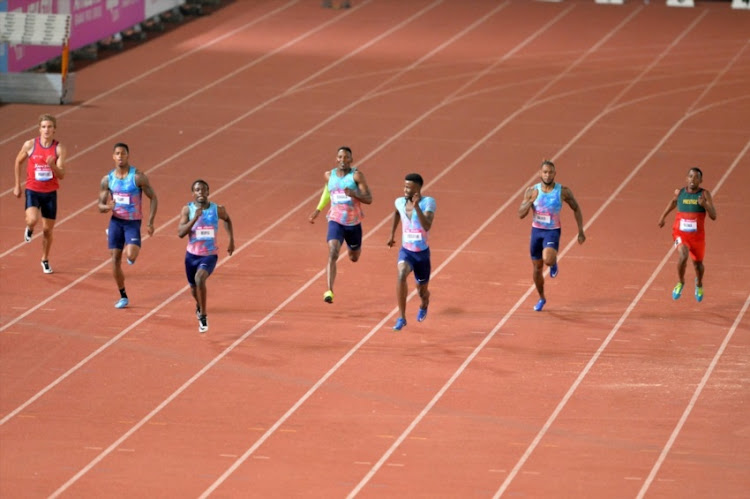 Anaso Jobodwana is back. The world championship 200m bronze medallist from 2015 was as dominant as he was cheeky as he stormed over the Ruimsig track to claim a sweet victory.

Jobodwana scored one of the rare South African successes in this opening meet of the Athletix Grand Prix in Roodepoort, where most of the track events were won by the foreign legion of stars.

And Kenyan George Manangoi unleashed a lethal kick as he swept past more-fancied Ronald Musugala of Uganda to win the men’s 1500m in 3min 40.62sec.

But South Africa, right now, is about the sprinters, and Jobodwana showed his form is coming back fast.

He practically ran the last 30 or so metres sideways as he eyeballed young Clarence Munyai, his nearest rival, before crossing the line first in 20.13sec.

Although considerably slower than his 19.87 personal best, that was still his sixth fastest time, and if he hadn’t been toying with Munyai, he probably would have gone 20-low.

Isaac Makwala of Botswana ended fifth in 20.89, but that was understandable after winning the 400m in 45.03 about 30 minutes earlier.

The night belonged Jobodwana, the talented sprinter who has spent the past two seasons on the sidelines because of injury, and then confidence.

Even so, Jobodwana felt he could still go faster. “It’s my first really competitive 200m of the season and I think my bend could have been a little bit better, but with the time I really can’t complain about what I did today.”

Jobodwana said he had been heartened after his 10.07 100m in Pretoria at the weekend.

“That really shows my 200m is in a good place, but I’ve had a mental block in it for a very long time. I think we’ll know in April how fast I can go,” said Jobodwana, who will compete at the Commonwealth Games in Gold Coast, Australia.

“I think my confidence is coming back and in time I think I’ll be able to not only talk rubbish to Clarence but to the rest of the world too,” said Jobodwana.

“You never know how other people are going to take the trash-talking, but me and him have a very good rivalry going.”

Munyai, chuffed with his own effort of 20.18, thought he had the race won coming out the bend, but he realised he was in trouble when he glimpsed the Jobodwana juggernaut coming up on his inside.

Van Zyl was edged by his old rival Greene, but he was pleased with his second spot ahead of SA champion Le Roux Haman.

“The old lion is not dead,” roared Van Zyl, the 2006 Commonwealth Games champion who took silver behind Greene in 2010.

Greene also beat Van Zyl at the 2011 world championships, but Van Zyl praised his old foe. “He’s been through a tough three, four years, but now he’s back. What a champ!”

He came to South Africa to train for five weeks and try qualify for the Commonwealth Games in Gold Coast in April, which he’s now done — and he and Van Zyl will renew hostilities once more.

“I’ve got a gold, I’ve got a silver and I just made a joke, maybe I’ll get a bronze to complete the set.”

Justine Palframan and Wenda Nel were no match for the Botswana duo of Montsho and Christine Botlogetswe, who finished first and second.

Montsho burned the field in an impressive 50.66, but Palframan was happy with her 52.19.

The class field had pushed her, she said. “Running in smaller meets, when I get to a certain point there’s no-one to push me.”

Nel, who specialises in the hurdles, tried to go with Montsho when she kicked on the back straight. “I tried to go when them at the back and then I realised I was going to be too tired to finish strong.”