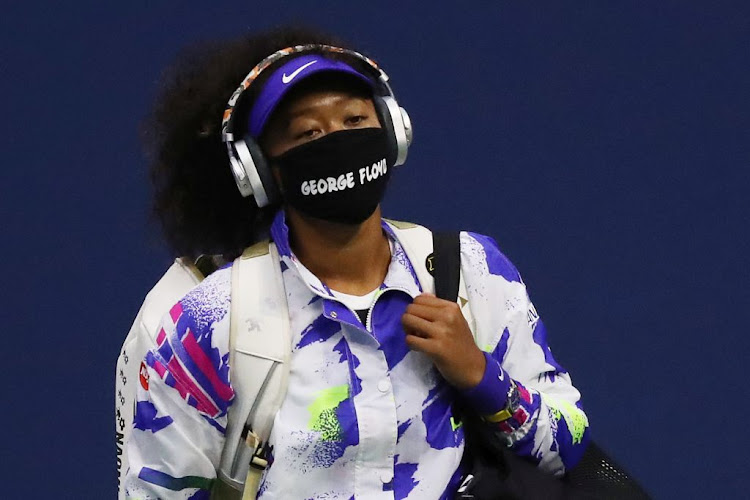 Naomi Osaka walks in wearing a mask with the name of George Floyd on it before her quarter-finals match against Shelby Rogers in the 2020 US Open. Osaka has been praised by golfer Michelle Wie West after withdrawing from the French Open following her decision not to attend post-match interviews.
Image: Matthew Stockman/Getty Images

Osaka announced her decision on Monday, a day after she was fined $15,000 for not attending a post-match media conference and threatened with expulsion after her first-round win.

The four-times Grand Slam champion had signalled her intentions to skip her media duties to protect her mental wellbeing and on Monday said she had suffered from depression and social anxiety.

“I thought what Naomi did this past week was incredibly brave,” Wie West said on Tuesday. “I also understand that part of being an athlete is speaking to the media because that’s how the tournaments get done, (it) is through the media coverage.

Osaka has received support from her country Japan, her sponsors, leading sporting figures and tennis fans since she announced her decision.

The four Grand Slam tournaments released a statement on Tuesday commending Osaka for sharing her experience and promised to make things better for players.

Wie West, who won the 2014 US Women’s Open, said there was a need for more conversations regarding the mental wellbeing of athletes.

“It is crippling at times, but I’m really proud of athletes taking charge of their mental health and making it a priority,” she added.

Leading figures in tennis and sport have rallied to support Naomi Osaka after the women's world number two withdrew from the French Open in a row ...
Sport
3 weeks ago

Japan's Naomi Osaka stunned the French Open on Monday when she announced she was withdrawing from the tournament in the wake of her decision to ...
Sport
3 weeks ago

The French Open has deleted a post on its Twitter feed which praised players for attending media conferences as Naomi Osaka’s press boycott continued ...
Sport
3 weeks ago