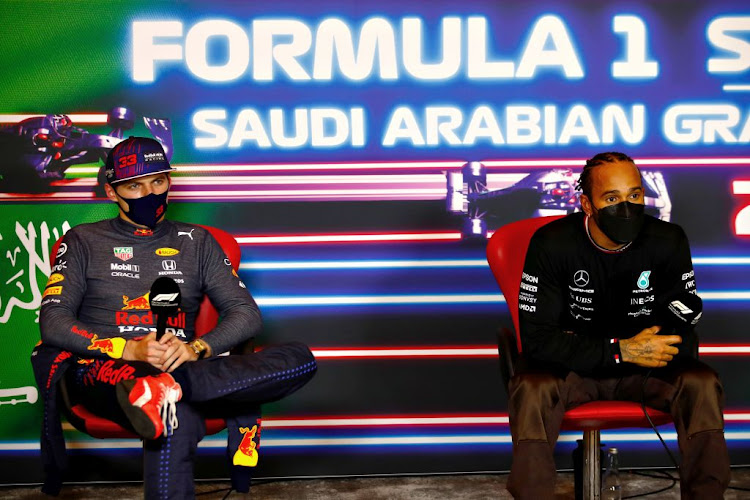 Race winner Lewis Hamilton of Great Britain and Mercedes and second placed Max Verstappen of the Netherlands and Red Bull Racing at a press conference after the F1 of Saudi Arabia at Jeddah Corniche Circuit on December 5 2021 in Saudi Arabia.
Image: Sam Bloxham - Pool/Getty Images

Max Verstappen defended his driving after F1 stewards found him mainly responsible for a collision with title rival Lewis Hamilton in the Saudi Arabian Grand Prix on Sunday.

The 24-year-old Red Bull driver was handed two time penalties totalling 15 seconds — a five-second sanction awarded during the race for running off the track and keeping the lead while defending against Hamilton and a 10-second penalty after the race for a collision as he attempted to hand the place back.

"I went to drive to the right side and I slowed down and I was braking, downshifting and he just stayed super close behind me," Verstappen said, adding he was trying to let Hamilton pass.

Hamilton, who ran into the back of the Red Bull car, later accused his rival of "brake-testing". "I’m just going slower and slower, pulling the downshift and then we had a miscommunication or whatever and he ran into the back of me and, yeah, that was it," Verstappen said. In their verdict, the stewards acknowledged that Hamilton could have driven past when he saw Verstappen slowing.

But they understood why neither he nor Verstappen wanted to be in front heading into the DRS zone, which would have made whoever was in front vulnerable from behind. They found Verstappen braked suddenly and erratically and determined he had been predominantly at fault. Speaking about his lap 37 defensive move, Verstappen said he didn't understand why he had been singled out for a five-second penalty.

"I find it interesting that I am the one that gets the penalty when both of us ran outside the white lines," he said. "You could clearly see both didn’t make the corner. I think lately we’re talking more about white lines and penalties than actually proper Formula One racing."

Verstappen keeps his second place behind winner Hamilton despite the stewards' sanctions. The 36-year-old Briton's win, along with the extra point he scored for fastest lap, sees him draw level on points with his 24-year-old rival with only next week's Abu Dhabi Grand Prix to go. The Dutchman is in the overall lead, however, on account of having won more races, setting up an enticing winner-takes-all finale.

Verstappen and Hamilton play it cool ahead of crunch time

Max Verstappen cut an unfazed figure on Thursday heading into the inaugural Saudi Arabian Grand Prix, a race which could bring the Red Bull driver a ...
Motoring
1 month ago

Hamilton speaks out on human rights ahead of Saudi F1 debut

Seven-times Formula One world champion Lewis Hamilton expressed concern about human rights in Saudi Arabia on Thursday, and indicated he did not feel ...
Motoring
1 month ago