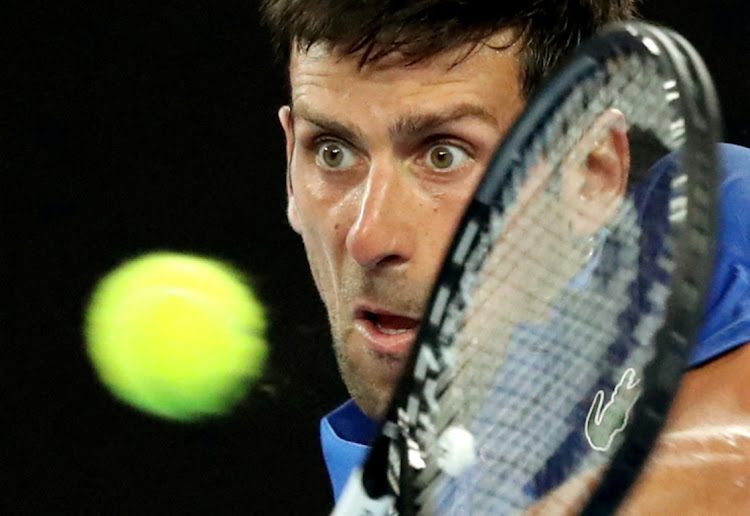 Novak Djokovic was left stranded at an Australian airport overnight, caught in a political maelstrom over whether to honour the World No. 1's medical exemption from vaccine requirements or send him home due to a visa blunder.

Djokovic touched down at Melbourne's Tullamarine airport Wednesday about 11:30 p.m. local time after a 14-hour flight from Dubai.

But he was still awaiting permission to enter the country to play the Australian Open after it emerged that his team had applied for a visa that does not allow for medical exemptions.

That prompted the local government of Victoria, the state where the Open is played, to say it would not support Djokovic's application, putting his fate in the hands of the federal government and Prime Minister Scott Morrison.

Djokovic father, Srdjan, told Serbian media that his son was waiting alone in a room at the airport under armed guard for a final decision on whether he could enter the country.

Morrison has faced an enormous backlash over his government's decision to grant Djokovic a medical exemption from vaccination to play at the Open, where the player would be bidding for a record 21st major title.

Australia, especially the state of Victoria, has endured the world's longest cumulative lockdown and an outbreak of the Omicron variant has sent case numbers to record levels.

Following the backlash, Morrison suggested Djokovic's participation was not a done deal and he would have to satisfy the federal government, which has responsibility for international borders and visas and was not part of the exemption process.

Morrison said shortly before Djokovic's arrival that there would be "no special rules" for him on his exemption.

"If that evidence is insufficient, then he won't be treated any different to anyone else and he'll be on the next plane home," Morrison told a media conference earlier.

Djokovic came in on an Emirates flight but when border officials contacted the Victorian government to ask if the state would formally support the world number one's visa, it said it would not.

"We will not be providing Novak Djokovic with individual visa application support to participate in the 2022 Australian Open Grand Slam.

It was not clear whether the federal government would allow his entry. The Border Force did not respond to a request for comment.

Tennis Australia and government officials moved quickly to stress that Djokovic, who has said he is opposed to COVID-19 vaccinations, had received no preferential treatment.

The Serbian, who has previously declined to reveal his vaccination status, has won nine titles at Melbourne Park including the last three. He confirmed on Tuesday that had received a vaccination exemption to allow him to play at the Australian Open, which starts on Jan. 17.

Australian tennis great Rod Laver, after whom the main showcourt at Melbourne Park in the state of Victoria is named, warned that Djokovic might face hostility from the local crowd.

"I think it might get ugly," Laver told News Corp. "I'd think the Victorian people would be thinking 'Yes I'd love to see him play and compete, but at the same time there's a right way and a wrong way.'

"Yes, you're a great player and you've performed and won so many tournaments, so it can't be physical. So what is the problem?"

Melbourne local Christine Wharton said it was a "disgrace".

"We've all done the right thing, we've all gone out and got our jabs and our boosters, and we have someone that's come from overseas and all of a sudden he's been exempt and can play, and I think it's an absolute disgrace and I won't be watching it."

Tzaneen star Donald Ramphadi will get the chance to have world tennis sit up and take notice at this month’s Australian Open after he was awarded a ...
Sport
2 weeks ago

Novak Djokovic needs to prove that he has a genuine medical exemption from Covid-19 vaccination when he lands in Australia or he will be "on the next ...
Sport
2 weeks ago

Nick Kyrgios has withdrawn from the Melbourne Summer Set ATP 250 event due to asthma, organisers said on Tuesday, leaving him with only one ...
Sport
2 weeks ago