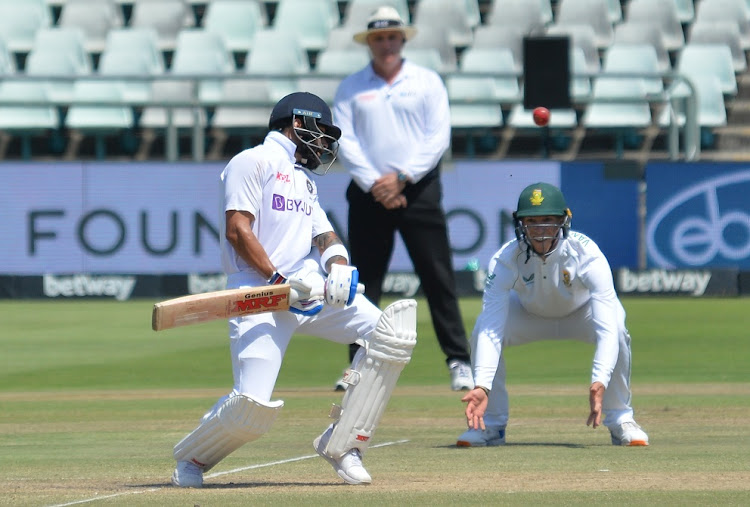 Keegan Petersen called on his teammates to make a fast start on day three of the deciding Test against India and that is what they did as the Proteas bagged two wickets in the first two overs at Newlands.

SA, desperate to rein in the tourists who have a 13-run first innings lead, struck the telling blows from either end, but India weathered the early storm to go to lunch on 130/4.

The second ball of the day again proved productive for the bowling side. On day two it was Aiden Markham who left his wickets unguarded and on Thursday Cheteshwar Pujara failed to deal decisively with a Marco Jansen delivery targeting his hip.

Pujara succeeded only in steering the ball to the right of Keegan Petersen at leg slip. Petersen plucked the ball out of the air with a sensational full-length dive and the Proteas were justifiably ecstatic.

Pujara's ability to drop anchor and render himself an immovable object is well documented and to see him depart early in a game that is going to be contested by tight margins would have been hugely pleasing to the home side.

There was double delight as Kagiso Rabada speared one at disconcerting height and line at Ajinkya Rahane in the next over.

The veteran fended at it and the ball took off above wicket keeper Kyle Verreynne who stuck out a glove. It was enough to break the ball's momentum and it looped behind the keeper where captain Dean Elgar completed the catch.

With Kohli glaring down the wicket Rahane stood his ground, but was given out after a review.

It gave rise to optimism that SA could restrict India to a manageable total that would allow the hosts to complete a successful fourth innings chase.

However, in Virat Kohli India have a captain who is unlikely to depart the scene without forcing his will on proceedings.

Kohli, who constructed a patient 79 off 201 deliveries in the first innings, was even more obdurate on Thursday morning. His 28 not out came off 126 balls.

He found a willing ally in Rishabh Pant, who was more committed to advancing the scoreboard. Pant reached his 50 off 58 balls just before lunch.

It may prove to be a significant contribution in the context of the series, not just in weight, but timing. Every run Pant added to the India total lengthened the odds on SA performing another miracle act in the fourth innings.

The inconvenient truth facing the Proteas in the remainder of their Test series against India is that they, in every sense, will be doing the chasing.
Sport
3 days ago

The desire to stand up to and counter the genius of India captain Virat Kohli, helped spur on Kagiso Rabada as he led the way for the SA attack on ...
Sport
4 days ago

India strike back but Petersen stands tall for Proteas

Keegan Petersen stood tall but India delivered telling blows at the other end on the second day of the deciding Test at Newlands on Wednesday.
Sport
4 days ago