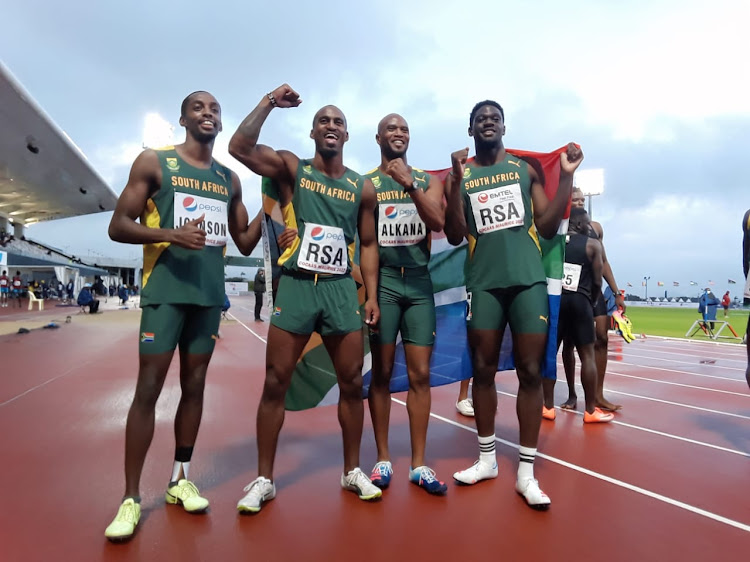 Cheswill Johnson, Henricho Bruintjies, Antonio Alkana and Benji Richardson show their delight after taking silver in the men's 4x100m relay at the African championships in Mauritius on Friday.
Image: SUPPLIED

A rag-tag men’s 4x100m relay outfit did well to land silver on the third day of the African championships in Mauritius on Friday, but it was left to the women to push up SA’s gold medal count by two to five.

Miranda Coetzee did it on the track while winning the 400m and Mire Reinstorf claimed the pole-vault title with Nicole Janse van Rensburg taking the bronze.

Coetzee was the only competitor to break 52 seconds in the one-lap contest, comfortably breaking the tape in 51.82 sec.

In the men’s 400m Zakhiti Nene ended fourth in 45.54, being denied a spot on the podium by a mere seven-thousandths of a second.

The relay men went into battle without sprint ace Akani Simbine, the anchor of this team since 2014, who sat out because of a quad muscle niggle after Thursday’s 100m final where he took silver.

Clarence Munyai, who competes in the 200m heats on Saturday, was also missing from the line-up.

Akani Simbine lost his African 100m crown to Kenya’s Ferdinand Omanyala in Mauritius on Thursday, but organisers had to measure the gap down to ...
Sport
3 weeks ago

Instead the motley crew comprised one veteran sprinter, a hurdler, a long-jumper and a junior — Henricho Bruintjies, Antonio Alkana, Cheswill Johnson and Benji Richardson — and they got the baton around in 39.79 to finish second behind a dominant Kenya (39.28).

SA’s qualification hopes for the world championships in Eugene, Oregon, next month could now depend on a wing and a prayer.

SA is currently ranked in the last available spot for the men’s relay — 16th in the world — thanks to the 38.51 effort delivered by the junior team at the under-20 world championships last year.

Just behind them are Nigeria, who had to settle for fourth place on Friday, crossing in 39.98, behind third-placed Zimbabwe in 39.81. Kenya have yet to qualify too.

Still, Friday was a time to celebrate.

“To get two medals is amazing,” said Bruintjies, the 100m bronze medallist in Mauritius who has struggled with injuries for the better part of two years. “I cherish all these moments.

“We have a couple of guys who are not normally relay guys, they came in, did their best and everyone’s just happy to get the medal.”

SA must hope nobody overhauls them before the end of the world championship qualifying window on June 26.

The women’s 4x100m team also picked up a silver medal, finishing behind Nigeria, though their 44.87 was well off the minimum 42.97 they’d need to get to the global showpiece.

Wayde van Niekerk pulls up in season-opener in Italy

Wayde van Niekerk pulled up injured in his first race of the season in Italy on Saturday night, hopping off the track about 50 metres into his ...
Sport
1 month ago

Akani Simbine had to settle for fourth spot in his first race abroad, although he clocked a 10.06sec season’s best at the Golden Spike meet in ...
Sport
1 month ago