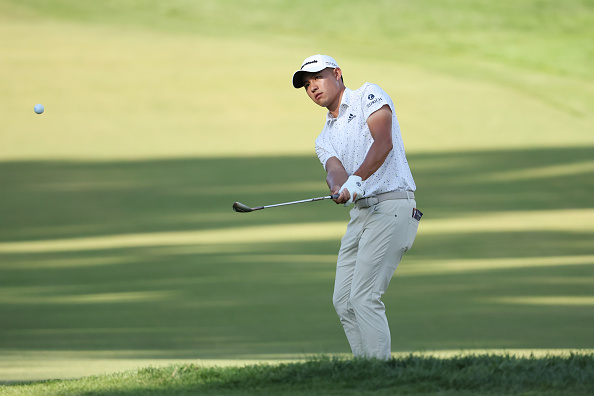 Collin Morikawa of the United States plays a shot onto the ninth green during the second round of the 122nd U.S. Open Championship at The Country Club on June 17, 2022 in Brookline, Massachusetts.
Image: Warren Little/Getty Images

One is a two-time major champion at just 25 years old. The other almost decided not to show up for his Monday qualifier.

Despite those differences, Collin Morikawa and Joel Dahmen share the 36-hole lead at the US Open.

Morikawa shot the low round of the day, a 4-under-par 66, and Dahmen posted a 2-under 68 to tie for the lead at 5 under Friday at The Country Club in Brookline, Mass.

They'll enter the weekend one shot better than defending champion Jon Rahm of Spain (67 Friday), Rory McIlroy of Northern Ireland (69), Hayden Buckley (68), Aaron Wise (68) and Beau Hossler (67), who are tied for third at 4 under.

And lurking not far behind is world No. 1 Scottie Scheffler, who posted a 67 earlier in the day to get to a tie for eighth at 3 under.

Morikawa started his round on the back nine with three birdies, made a fourth birdie at the par-4 first and absorbed his only bogey of the day at No. 4. But on his second stroke at the par-5 eighth, he hit a draw to inside 5 feet, pin-high.

“This week I think I was just really sticking and knowing what the shots were gonna be like,” Morikawa said. “I stuck to this little shot shape that I have and was gonna play it, and figure out a way to play it.”

Crucially, his short eagle putt slipped past the hole and he settled for birdie, returning him to 5 under.

Dahmen, like many pros and amateurs in the field, qualified for the US Open in a 36-hole qualifier on June 6.

He admitted earlier in the week that he didn't want to bother with what's considered to be the sport's toughest major, but his instructor convinced him to attempt to qualify and make up his mind from there.

Cut to Friday, as Dahmen put four birdies and two bogeys on his card to nose ahead of the crowded field.

“Thirty-six holes left in a US Open is a lot longer than 36 holes at any other golf course,” said Dahmen, a cancer survivor with one career win on the PGA Tour.

McIlroy recovered from a nightmarish double bogey on the third hole to shoot a 1-under round and stay alive.

McIlroy needed three hacks to get his ball out of some deviously tall rough, but he sank his 18 1/2-foot putt for double bogey to limit the damage.

From there, he made five birdies -three on the back nine — to offset two more bogeys.

“I got it in in the least amount of strokes possible on that hole after what happened,” McIlroy said.

“I stayed patient and I knew I was going to give myself chances if I just hit the ball the way I have been hitting it.”

Playing in Morikawa's group, Rahm made an early move with a 9-foot eagle putt at the par-5 14th. After a string of pars and a bogey at No. 1, Rahm birdied two of his last five holes to improve to 4 under.

“It was about as enjoyable as a US Open walk can be, really,” Rahm said.

“When you have two guys playing as good as we both were, I think it makes it even better for us as well.”

Scheffler had the shot of the day in the early wave.

At No. 14, his third shot from out of the rough rolled onto the green and straight to the cup for an eagle.

Scheffler won four events in his six starts earlier this season, culminating at the Masters, his first major title.

“I don't really come to tournaments expecting too much. I just show up and try to do my best,” Scheffler said on the CBS broadcast.

“I've been hitting the ball really well this year and playing some good golf and I'm just trying to continue to do that.”

Sam Burns (67), England's Matt Fitzpatrick (70) and Canada's Adam Hadwin (72) were at 2 under. Hadwin, the first-round leader, followed Thursday's 66 with a 2-over round, but he birdied his final two holes to end on a positive note.

Notable names at 1 under included Xander Schauffele (69), Keegan Bradley (69) and Will Zalatoris (70). Sweden's David Lingmerth (72) briefly held the lead at 5 under by going 2 under through his first 10 holes, but four bogeys in his last six relegated him to 1 under as well.

The cut line wound up at 3 over par, with the top 60 players and ties advancing to the weekend. Brooks Koepka (even), Japan's Hideki Matsuyama (even), Justin Thomas (1 over), Dustin Johnson (1 over), Bryson DeChambeau (2 over), Jordan Spieth (2 over) and Patrick Cantlay (3 over) made the cut.

Phil Mickelson followed his opening-round 78 with a 73 Friday and finished 11 over, missing the cut by a mile.

South Africa's Charl Schwartzel held off compatriot Hennie Du Plessis to claim the biggest pay cheque in golf history at the opening event of the LIV ...
Sport
3 weeks ago

LIV Golf tees off in London, Charl Schwartzel in front

Charl Schwartzel of SA shot a 5-under-par 65 on Thursday to become the first opening- round leader of a LIV Golf Invitational Series event, although ...
Sport
3 weeks ago