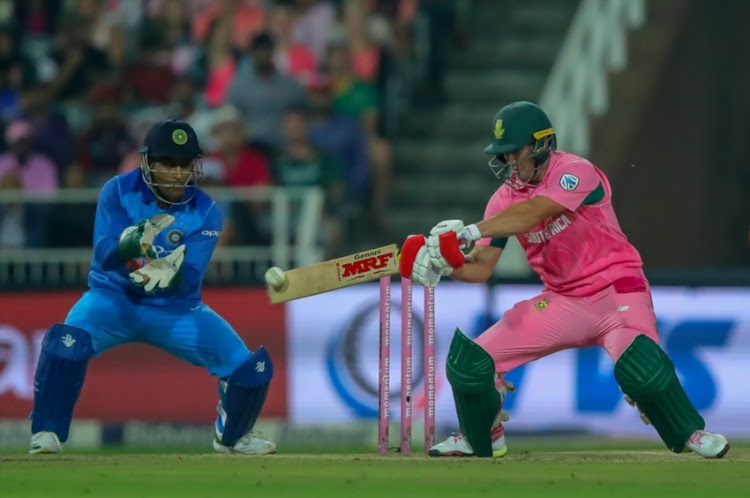 With a little bit of help from rain and a stupendous partnership of 72 off 42 between David Miller and Heinrich Klaasen, South Africa beat India by five wickets (DLS) during their revised Pink ODI in Johannesburg on Saturday night.

Special mention also must go to AB de Villiers and Andile Phehlukwayo whose respective scores of 26 and 23 contributed hugely to this much needed victory.

India posted 289/7 from their allotted 50 overs, with Shikhar Dhawan scoring a century, after they won the toss and chose to bat but rain disrupted proceedings and caused a delay of 102 minutes shortly after Proteas began their chase.

When the match resumed, South Africa was faced with a revised target of 202 from 28 overs and needing 159 from 124 balls.

With the imperious batting of Miller (39) and Klaasen (43), South Africa reached their revised target with 15 balls to spare as they halted the three match losing streak to take this series to 3-1 with two matches in Port Elizabeth and Centurion to come.

India first wicket came when Jasprit Bumrah trapped Aiden Markram in front during the power play having scored 22 off 23.

As Markram made his way back to the pavilion, field umpires also ordered players off the field as rain started to fall.

South Africa lost two quick wickets to Kuldeep Yadav who trapped JP Duminy in front and Hashim Amla was caught by on 33 by Bhuvneshwar Kumar.

Then, AB de Villiers’ quickfire cameo of 26 off 18 balls came to an end when he was caught by Rohit Sharma at fine leg from Hardik Pandya and he was followed by Miller who was trapped in front by Yuzvendra Chahal.

In the process of this much needed victory, the Proteas also took their tally of wins in this hugely popular Pink ODI event to six following wins over Pakistan, India on two occasions, West Indies, England and Sri Lanka.

Earlier during the Indian innings, Kagiso Rabada got the breakthrough in the fourth over when he caught and bowled Rohit Sharma on five runs.

Sharma’s demise introduced Virat Kohli to join Dhawan and they put together a solid partnership of 135 runs before the inspirational Indian skipper was dismissed by Chris Morris.

When he was caught by Miller from the bowling of Morris after 32 overs, Kohli was on 75 off 83.

Dhawan continued to frustrate the South African bowling attack and scored his 13th century which earned him the title of being the first Indian player to score a ton on his 100th match and the ninth overall.

Dhawan’s innings came to an end when he was caught by De Villiers at mid-off from the bowling of Morne Morkel having scored 109 off 105 balls.

South Africans were rewarded again with the dismissal of Anjikya Rahane for eight when Rabada showed safe hands at backward point from the bowling of Lungi Ngidi.

Ngidi struck again when Morris took an easy catch at long on to dismiss Shreyas Iyer for 18 runs and he was soon followed by Pandya who was removed by Aiden Markram’s spectacular at extra cover from Rabada.

Then, Kumar was run out by a combination of JP Duminy and Morris.