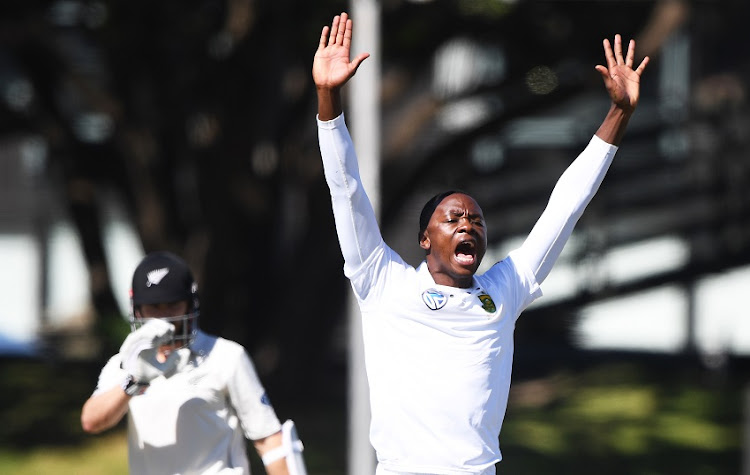 No news is good news if you’re a member of South Africa’s team trying to win their one-day series in Australia‚ particularly if you’re Kagiso Rabada.

The quiet in both Australia and Dubai means Rabada is likely to be part of the visitors’ line-up in the decider in Hobart on Sunday.

That was less certain in the second game in Adelaide on Friday after Rabada lashed out verbally at dismissed batsman Chris Lynn.

The fast bowler‚ who needed Dali Mpofu’s help to escape a ban for shoulder charging Steve Smith during the St George’s Park Test in March‚ has seven demerit points.

One more would mean a ban of four white-ball internationals or two Tests‚ whichever come first.

The umpires in Adelaide could have put that process into motion by reporting Rabada to match referee Jeff Crowe‚ who hit the South Africa spearhead with a three-point penalty and a two-Test suspension for what he did to Smith.

Mpofu’s intervention reduced that‚ on appeal‚ to a point and no ban.

South Africa’s team management in Australia and ICC sources in Dubai said‚ around noon (SA time) on Saturday‚ that nothing had been heard from Crowe.

That was more than 24 hours following the completion of the match‚ the window the umpires had to lay charges.

But that doesn’t mean Rabada is off the hook. International Cricket Council (ICC) chief executive David Richardson has the authority to go after players who fall foul of the code of conduct‚ which he used in 2016 when he brought ball-tampering charges against Faf du Plessis after the umpires declined to prosecute.

Richardson has five days to make up his mind‚ so Rabada may yet feel a chilling tap on his shoulder.

That’s not ideal for a South Africa team who would prefer to keep their focus on trying to recover from letting things slip in Adelaide.

Having reduced Australia to 204/9‚ South Africa allowed Adam Zampa and Josh Hazlewood to add 27 runs for the last wicket — crucial in a match the home side won by seven runs.

“They dragged that last partnership out‚” David Miller said in Adelaide. “If you want to be critical‚ that’s probably where we lost the game. But we were also 60/4.”

In fact‚ South Africa were 68/4 before Du Plessis and Miller shared 74 to put South Africa back on track for a victory that would have clinched the series.

Miller stayed in the fight until the 44th over‚ when he came down the pitch to medium pacer Marcus Stoinis and was trapped in front for a hard-grafted 51.

“I enjoy those kind of moments‚ when the team’s in trouble‚” Miller said. “It’s a nice opportunity for me to bat and stretch a partnership out really well.”

Even so‚ the South Africans would prefer for Miller not to have to work too hard on Sunday‚ as was the case in Perth on Sunday.

Australia were bowled out for 152 and Miller faced one ball before Du Plessis hit the winning runs to seal the visitors’ six-wicket success.

Not that Friday’s result surprised Miller‚ and that despite the fact that it was only Australia’s second win in 12 ODIs this year.

“Australia versus South Africa is always competitive‚ so we don’t want to take anything for granted‚” he said.

“We were up for it [in Adelaide] but we made little mistakes along the way which cost us.”

And he knew the batsmen made most of them‚ considering the bowlers “have been pretty ruthless in the first two games”.

But he implored South Africa’s attack to “try and get them below 200 in the next game”.

That’s only been done once this year in a completed innings — by the South Africans in Perth‚ albeit on an unusually responsive pitch for an ODI — but they proved it’s doable.

For their next trick‚ they need to get Rabada to stay in his lane.