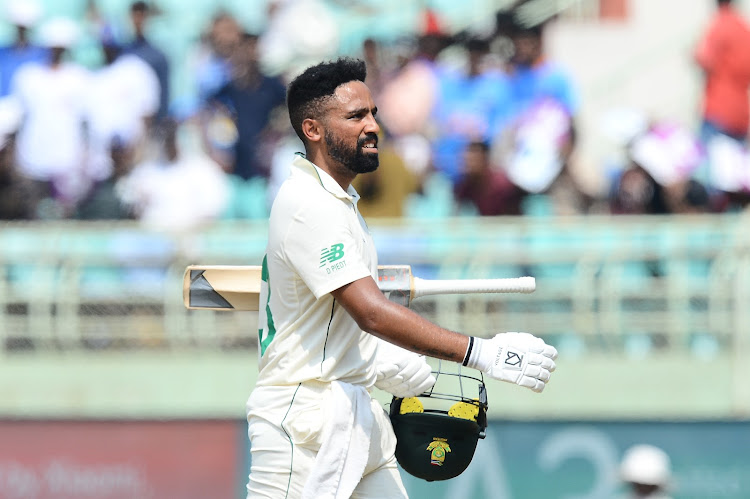 Dane Piedt of South Africa walks back after been bowled out during day 5 of the 1st Test match between India and South Africa at Dr. Y.S Rajasekhara Reddy ACA VDCA Cricket Stadium on October 6,2019 in Visakhapatnam, India.
Image: Isuru Sameera Peris/Gallo Images

Dane Piedt and Senuran Muthusamy didn’t add much to South Africa’s attack in the first men’s Test in Visakhapatnam‚ but they did plenty for the defence.

The eighth-wicket pair defied India’s bowlers for 194 deliveries on Sunday‚ with Piedt scoring his first Test half-century‚ hitting nine fours and a six in his 56‚ and Muthusamy adding an unbeaten 49 to the 33 not out he scored in the first innings.

Their partnership of 91 was the biggest of the innings and South Africa’s third-highest of the match.

Nonetheless‚ India wrapped up victory by 203 runs on the fifth day with Mohammed Shami taking 5/35 in only 10.5 overs and Ravindra Jadeja claiming 4/87.

Set an out-of-sight 395 for victory‚ South Africa resumed on 11/1 and were dismissed for 191 before tea.

The result will overshadow the fact that South Africa fought back to within 71 runs of parity with India’s mammoth first innings of 502/7 declared.

The home side were in sight of victory when the visitors slumped to 70/7 in little more than an hour on Sunday with the sturdiest resistance coming from opener Aiden Markram who was sixth out for a 74-ball 79.

Markram was the first casualty of an over by Ravindra Jadeja that also claimed the wickets of Vernon Philander and Keshav Maharaj.

Rohit Sharma became the only man to score centuries in both innings in his first Test as an opener to keep India on top against South Africa in ...
Sport
2 years ago

By then Mohammed Shami had removed Temba Bavuma and Quinton de Kock for ducks and Faf du Plessis for 13.

Piedt and debutant Muthusamy were picked as supporting spinners for Maharaj‚ and banked joint match figures of 54-5-301-2.

Maharaj got through 55 overs on his own in the first innings and conceded 318 runs in the match‚ both are records for a South Africa bowler.

But Piedt and Muthusamy wiped some of the egg off the spin section’s faces with a partnership that would have made South Africa’s frontline batters wonder where they had gone wrong.

Dean Elgar and De Kock scored centuries in a first innings of 431‚ the sixth-biggest of the 30 innings South Africa have had in India‚ in which Du Plessis made a half-century.

“That was a line in the sand for us‚” Du Plessis told reporters on Sunday. “There are a lot of new players in our team and it could have gone the other way. It didn’t. Getting 400 in the sub-continent is fantastic.”

They were unable to follow that lead in the second dig‚ not least because India bowled cannily and the pitch‚ though far from unfair‚ offered low bounce in the last stages of the match.

But Piedt’s controlled aggression and Muthusamy’s stickability offered valuable insight into how South Africa should bat in the second Test in Pune which starts on Thursday.

“The big thing for us as a team is to focus on how strong our heads can be‚” Du Plessis said.

“There’s not much you can do in the nets over the next two days to be strong in the next Test‚ but mentally how are we able to put away the last day‚ when we didn’t play well‚ and come back hungry to put in a big performance.

“We’ve got a lot of confidence and belief in the dressing room because of what happened in the first innings.”

South Africa needed 492 deliveries to take India’s first wicket and 189 — not a lot more than a third as many — to claim the next four.
Sport
2 years ago

Uncapped Shubman Gill has gone to the top of South Africa’s homework pile for their men’s Test series in India next month.
Sport
2 years ago

Amol Muzumdar has work cut out as SA batting coach

You might wonder whether Amol Muzumdar agreed to be South Africa’s men’s Test team’s interim batting coach before Monday — when he gained an inkling ...
Sport
2 years ago