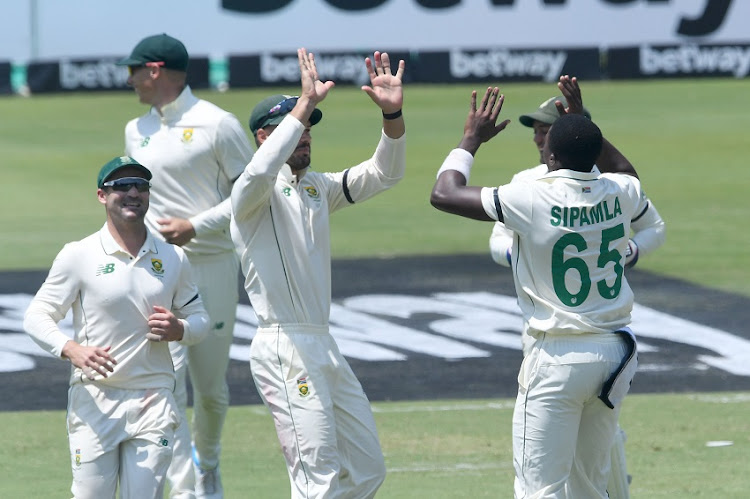 Lutho Sipamla of the Proteas celebrate the wicket of Vishwa Fernando of Sri Lanka with his team mates during day 2 of the 1st Betway Test (WTC) match between South Africa and Sri Lanka at SuperSport Park on December 27, 2020 in Pretoria, South Africa.
Image: Lee Warren/Gallo Images

Debutant Lutho Sipamla claimed three wickets in quick succession on day two of the Boxing Day Test at SuperSport Park in Centurion on Sunday as SA finally bowled out Sri Lanka for 396/9.

When lunch was called, the Proteas were sitting on 45/0 after 11 overs with openers Dean Elgar on 15 and Aiden Markram on 27 and still trailing Sri Lanka by 351 runs.

Having struggled on the first day where he got only one wicket, the 22-year-old Sipamla dished out an improved performance to clean up the Sri Lankan tail of Kasun Rajitha, Vishwa Fernando and Lahiru Kumara.

At some stage on a hat-trick during the first session, Sipamla ended the first innings with figures of 4/75 after 16 overs. He was followed by all-rounder Wiaan Mulder with 3/69 in his 20 overs.

The other contributors for the Proteas with ball were Lungi Ngidi and Anrich Nortjé who ended their first innings shift with a wicket apiece, with spinner Keshav Maharaj ending empty-handed.

For the visitors, Dinesh Chandimal was their top scorer with 85 off 161, a knock that included 11 boundaries, and the other notable contributors to their scoreboard board were Dhananjaya de Silva (79) and Dasun Shanaka (66).

Sri Lanka have been dealt a huge blow as top order batsman De Silva, who retired hurt on day one with a thigh strain, was unable to bat again and he has been ruled out of the series.

Despite De Silva’s unavailability, the visitors managed to add 56 runs to their overnight score in just an hour of play and they also put together their highest innings score in SA.

Sipamla’s demolition job started when he removed Rajitha and Fernando from successive balls in the 94th over before he wrapped up the tail with the wicket of Kumara.

Anrich Nortje is the fastest bowler in the South African Test squad and will be expected to ask the most questions of Sri Lanka’s batsmen when the ...
Sport
1 year ago

Cricket South Africa (CSA) has revealed that the Proteas players will raise their fists at the beginning of the Boxing Day Test against Sri Lanka at ...
Sport
1 year ago

Stand-in skipper Ajinkya Rahane stepped out of Virat Kohli's shadow with an inspiring century on Sunday as India's batsmen banished their horror 36 ...
Sport
1 year ago