Faf du Plessis on his missed double ton: ‘I will take 199’ 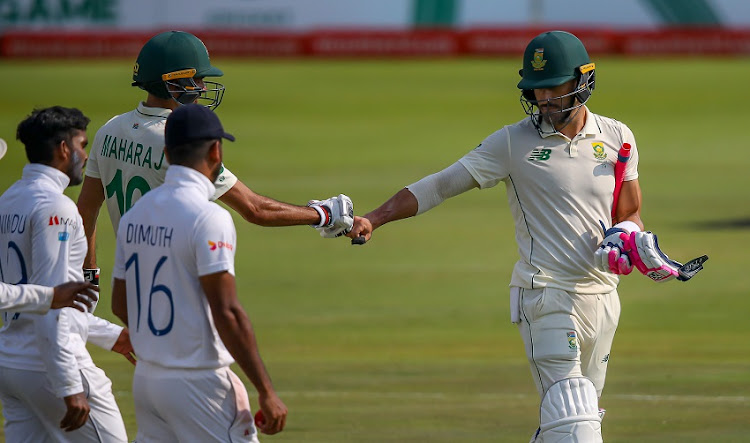 Faf du Plessis is congratulated by the Sri Lanka players after being caught on 199 during the third day of the first Betway Test (WTC) match between SA and Sri Lanka at SuperSport Park in Pretoria on December 28 2020.
Image: Gordon Arons/Gallo Images

SA batsman Faf du Plessis has admitted that he poorly executed the shot that got him out on 199 during day three of the Boxing Day Test against Sri Lanka in Centurion on Monday.

Du Plessis was caught by Dimuth Karunaratne at mid-on from the bowling of Wanindu Hasaranga in the afternoon session and missed out on registering his maiden double ton.

“For my dismissal‚ they brought the fielder up to mid-off and mid-on‚ so I thought I would just pop it over his head‚” he said at stumps on day three with SA in full control as Sri Lanka were struggling on 65/2 and a deficit of 160 in their second innings.

“The field was down the whole day and they brought the guys up on 99 and 199 as well. I tried to hit it — possibly it was too straight because the ball was a googly‚ but I should have probably gone with it more over mid-on.

“I feel it is a shot that I play really well when the field is up. Execution was perhaps not as I would have liked it to be.”

Cricket doesn’t come crueler than this.
Sport
1 year ago

Du Plessis‚ who faced 276 balls during his marathon innings‚ added that he was not in a position to try to hit the ball for a six and he was motivated to get over the line for his double ton.

“I was also pretty tired at that stage and maybe the intensity of trying to make sure that I hit the ball for a six instead of just ‘fuffing’ it to mid-on, I wasn’t in the greatest position to try and hit it for a six.

“It is something that I have always wanted to achieve and to get so close and not get it is obviously not ideal. But in saying that‚ I felt very good on the crease today and I will take 199.”

The other big talking point of day three was Temba Bavuma‚ who walked even though his bat did not connect with the ball on its way to wicketkeeper Niroshan Dickwella behind the stumps.

“If a batter walks like that and that quickly‚ you just assume that he nicked it.”

India turn tables on Australia in Melbourne to level series

A rejuvenated India shorn of Virat Kohli turned the tables on Australia to claim the second test within four days in Melbourne on Tuesday, a rousing ...
Sport
1 year ago