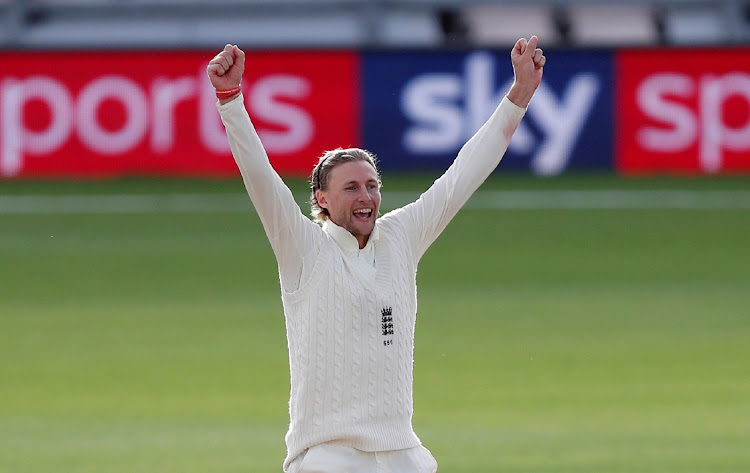 England captain Joe Root became the first batsman to smash a double-hundred in his 100th test, crafting a massive 218 runs to put his team in charge of the opening match against India in Chennai on Saturday.

The 30-year-old registered his second double-century in three matches as England amassed 555-8 on a flat wicket at the MA Chidambaram Stadium.

At the end of Day Two, Dom Bess was batting on 28 with Jack Leach on six at the other end.

Root was seen battling cramps in the final overs on Friday but returned to hound India's bowlers when England resumed on 263-3.

The right-hander looked typically solid against an Indian attack which could manage only a couple of half-hearted lbw appeals against him in the first two sessions.

Root was more than happy to let Ben Stokes dominate their 124-run collaboration for the fourth wicket as the boundaries flowed, while the latter praised his captain's performance later.

"It's a bit frightening when you're at the other end and he's playing like that and how easy he makes the game look," Stokes said.

"At the moment he's in incredible form and to play the way he has done in such tough conditions, so alien to us as England batsmen, is incredible."

Playing his first test since August, Stokes smashed 10 boundaries and three sixes in a typically entertaining 82.

India's desperation for a breakthrough showed when they blew back-to-back reviews after lbw appeals against Stokes and Root had been turned down.

The home side did not look sharp on the field either. Ravichandran Ashwin dropped a return catch from Stokes, then on 31, and in the next over, the all-rounder's slog-sweep brushed a diving Cheteshwar Pujara's fingers at midwicket.

Pujara later made amends by taking a juggling catch after Stokes had played a slog-sweep against left-arm spinner Shahbaz Nadeem.

Root prevailed in a duel with Ravichandran Ashwin, hitting the off-spinner for six to bring up his fifth test double-hundred.

For England, only Wally Hammond on seven has more double-centuries than Root, who also scored a double-hundred and a century in his last two tests in Sri Lanka.

Ishant Sharma gave India a boost late in the day, dismissing Jos Buttler and Jofra Archer in successive deliveries, although Leach denied him a hat-trick.

"On such a docile track, those back-to-back wickets really lifted our morale," Nadeem told reporters.

"The pitch is still very good for batting, and I'm sure our batsmen will also put up a big total."