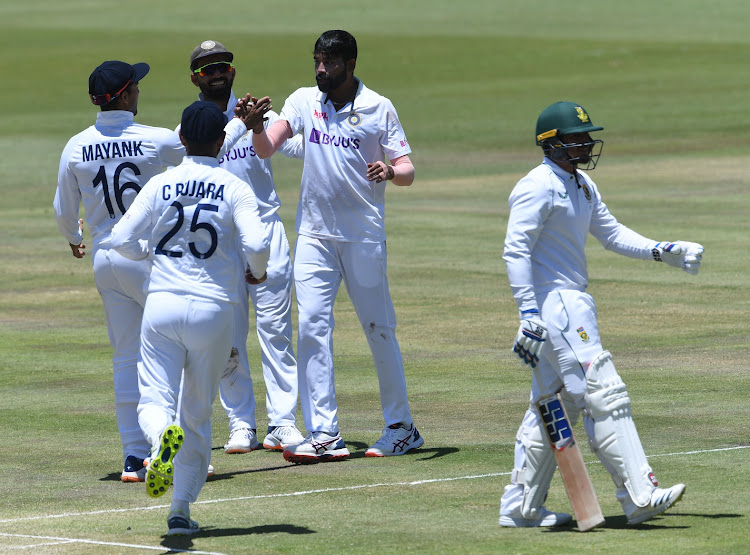 Mohammed Siraj of India celebrates the wicket of Quinton de Kock of the Proteas on day 5 of the first Test at SuperSport Park in Centurion on December 30 2021.
Image: Lee Warren/Gallo Images

India have thrashed a woeful SA by 113 runs in the Boxing Day Test at SuperSport Park in Centurion.

The visitors took a 1-0 lead in the three-match series that moves to the Wanderers next week in Johannesburg, then to Newlands in Cape Town later next month.

This crushing defeat will once again shine a spotlight on the future of Proteas coach Mark Boucher and has also exposed the many batting weaknesses in the team.

India completely dominated the Test match, which saw no ball bowled on Monday's second day due to rain, from the beginning to end as they scored 501 runs and took 20 wickets.

India closed this match in the first innings where they reached 327 with opener KL Rahul scoring a sparkling century of 123, including 17 boundaries and one maximum, after winning the toss and electing to bat.

Lungi Ngidi was the best bowler for the Proteas in the first innings with six scalps and he was followed by Kagiso Rabada with three to his name, with debutant Marco Jansen claiming the other one.

SA struggled to 197 under relentless pressure from the Indian fast bowling attack of Mohammed Shami, who took five wickets, supported by Jasprit Bumrah and Shardul Thakur with two, and Mohammed Siraj with one.

A defiant Kagiso Rabada has insisted that the Proteas are still alive in this Boxing Day Test despite India needing six wickets to win on the final ...
Sport
6 months ago

In the second innings, the SA bowlers did their job as they restricted India to 174 with Rabada and Jansen claiming four wickets each and Ngidi returning with two.

For India, Rishabh Pant was their only notable scorer with 34 runs but they had done enough as they set SA a target of 305 runs to win, which proved a bridge too far.

In chasing the mammoth 305, Elgar, Bavuma and De Kock were the defiant batters with respective scores of 77, 35 and 21 but in the end it was not enough to take them home, SA managing a total of 191.

It was noteworthy that the Proteas had Elgar out for just one run in the first innings and Aiden Markram and Wiaan Mulder out for the same score in the second innings.

After two completed days of Test cricket, India have maintained the upper hand over hosts SA in this intriguing Boxing Day Test that is unfolding at ...
Sport
6 months ago

SA have been set an imposing target of 305 by India to win the Boxing Day Test at SuperSport Park in Centurion.
Sport
6 months ago

India increase lead to over 200 with seven wickets in hand

India added 63 runs to their overnight score and increased their second innings lead over SA to 209 before lunch of day four of the Boxing Day Test ...
Sport
6 months ago